The Minister of Environment, Tourism and Protocol for the Government of Maharashtra spoke at the IAA Olive Crown Awards where he was named ‘Green Crusader of the Year’ 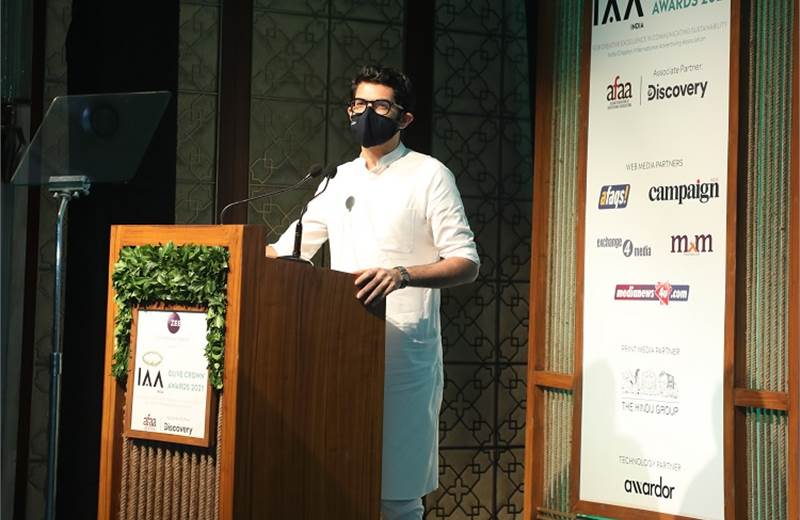 Aaditya Thackeray, Minister of Environment, Tourism and Protocol, Government of Maharashtra, has called out to the country’s communication industry to spread the importance of climate change.
Speaking at the IAA Olive Crown Awards – where he won the ‘Green Crusader of the Year’ – Thackeray said, “We need to communicate to the common man, the lawyers, the lawmakers, and to every single profession and citizen of the country what climate change means by going beyond jargon. If you can and want to help with this, I’d be pleased to team up and be a colleague of yours stronger than ever before.”
On the award, Thackeray added, “This recognition is very special to me. I don't see this as an award, I see it as a bit of encouragement for me to go ahead and take the strides to double our efforts. I can only ask the best communicators assembled here for your help to communicate the climate emergency we face today.”
Thackeray won the award for his untiring efforts to save the Aarey Forest in Mumbai, his active promotion of urban forests in cities across Maharashtra, and hands-on approach in beach clean-ups, and for ushering in a ‘Climate of Hope’.
Save Aarey
Thackeray explained how the efforts to ‘Save Aarey’ were in full swing over the last year.
“I was called to this event last year in March, too. But while efforts were ongoing since March last year, we weren't able to fully save Aarey. However, in the subsequent months during the Covid lockdown, and while we were working on the pandemic, we also started moving towards protecting Aarey,” he said.
He further explained, “The thing about Aarey is that it's not about only a few trees. It wasn't about a few blocks of forest. It was about the entire biodiversity that existed within our city. It's about the 808 acres that have now got reserved as a protected forest officially under the Indian Forest Act. This makes us (Mumbai) unique because we are probably the one city in the world that not just has enough trees but also has a leopard population in this forest. We have cubs of leopards and other endangered species there. That was a moment of pride.”
Outside of the ‘Save Aarey’ project, Thackeray added that the Government is looking to protect mangroves too. “Mangroves have always been a bone of contention for a lot of State Governments and urban local bodies. In the last year, we have been able to protect under the Indian Forest Act section 20 around 9,800 hectares of mangroves. This coming year another 3,000 hectares will be added. We have 10 conservation reserves, seven more coming up, two sanctuaries, a marine sanctuary and a flamingo sanctuary within the pyramid of Mumbai.”
The impact of The Day After Tomorrow
Thackeray stated that the film The Day After Tomorrow was a piece of communication that made him aware of climate change.
“On Twitter, Instagram, and all of social media, you must have seen panic awareness, normal awareness, constructive awareness, destructive awareness. These are all kinds of things that happen on social media. But if you ask me one thing (that made him aware about climate change), it was one bit of beautiful communication I came across around 2004 or 2005. It was the movie The Day After Tomorrow. If you connect that to what happened in New York last week, it's coming true. Back then scenes from the movie seemed about 150 years away. Cut to 2012, when I got active in politics by working with my father and colleagues, I visited some of the worst affected drought areas of Maharashtra. That's where I saw what drought and famine mean and the repercussions of it. For the next five years, all of us - social workers and politicians were going in the hinterland of Maharashtra trying to supply water. And then, from 2018 onwards we have seen some insane amounts of rainfall, storms, and cyclones. In 11 months, the West Coast, which was always considered safe from tropical cyclones, has faced two cyclones. Every time we've got rainfall in Mumbai and other parts of Maharashtra, there have been mini cloud bursts. This is a climate emergency,” said Thackeray before ending his talk with a promise.
“We will keep working every moment of every single day for the environment. You don't need an incentive for survival, and this is about survival.”