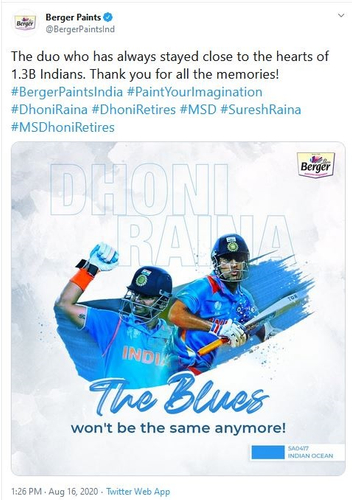 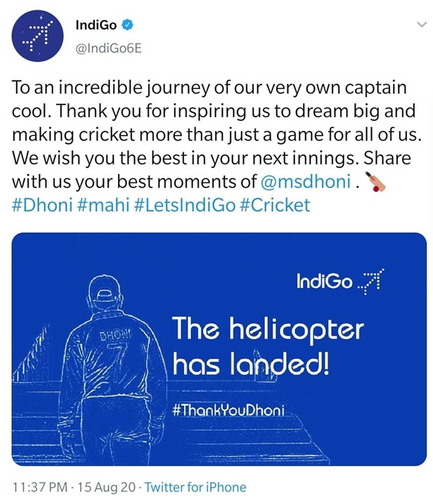 I have borrowed the phrase ‘famebombing’ from the more commonly used ‘photobombing’ nomenclature. Photobombing is the act of purposely putting oneself into the view of a photograph where you actually don’t belong. Photobombing is often described as a person, intentionally or unintentionally appearing in a photograph of someone or something else, and intentionally or unintentionally taking the focus and attention off the intended subject. To my mind, famebombing is kind of similar … it is the act of sponging off someone else’s moment of glory … and giving it the more respectable description of ‘moment marketing’.
MS Dhoni’s retirement announcement yesterday has triggered an outpouring of much love, respect and adoration for him. Not expectedly. Also much nostalgia and celebration of his many great innings, his victories, his exploits and his moments of glory.
We saw much the same happen when Yuvraj said goodbye. The social media platforms were inundated with congratulatory messages and ‘will-miss-you’ memes. Even at that time I had written about how all messages were not really kosher. In many ways, it was nice to see such a massive outpouring of love and admiration for the retiring Yuvraj. Testimony to all the love he earned over the years, visible gratitude for his unparalleled contribution to Indian cricket. But, there was a tiny little doubt that kept niggling in one far away corner of my advertising mind. Were these brands actually and truly enamoured of Yuvraj or were they all just taking a free-ride on his brand equity?
Not very far back, young Prithvi Shaw had fired off legal notices to some brands that put out congratulatory ads on his maiden test century. His contention broadly was that these brands were just skimming off his fame. That they were ‘passing off’ a connect to him without any valid commercial relationship with him. In Yuvi’s case, and in Dhoni’s case too, most of the love and admiration was surely genuine and bereft of ulterior motives, but I do see an increasing motivation amongst brands to ‘seize the moment’ on such occasions where brand messaging can be quickly conceived and tailored to a news event as it unfolds.
You could call it topical communication. Or opportune marketing. Or ‘Moment Marketing’ as some modern ad-gurus call it. Some like Amul have done it for decades. So you know they are genuine. But for most of the rest, it is a free ride created by some hastily summoned digital guys trying to salute and salaam a hero.
I personally found Manforce’s “maar” and “shots” references crude. Amazon Prime Video claimed nostalgia about April 2, 2011 when they were not even around in India and perhaps not even aware of the game of cricket! Zomato’s comfort food offer was more about itself than about Dhoni. Parle G was again focussed more on the goodness of its own biscuit than the retiring captain. KFC’s empty container and Berger’s #PaintYourImagination, or for that matter HDFC’s “bank’’ mention were all creatives with deceptive intent. A grabbing of an opportunity to bask in Dhoni’s glory.
Methinks this is all in bad taste. Sure he was a national hero.Still is. Always will be.  Sure you must salute him, celebrate him. But then don’t try and be clever in your creatives … don’t pun and posture as if you are just being so pure hearted while your lines are more self-advertising and self-glorification tied to to the event unfolding in that moment.
Wake up ASCI! This is deceptive stuff. If one of Dhoni’s 44 brands he advertised last year, or even brands he endorsed in the past step up and derive advertising mileage from his retirement, then that is legit. The rest are deriving unfair mileage at the celebrity’s cost. Unfair. Unethical. Uncalled for.
Dhoni and association with his personal brand has economic value and benefit. We all know that. Wilfully not exploiting a grey area of ethics is what good governance values are all about. Corporates who try and find convenient escape routes to benefit are reprehensible.
Today it is Dhoni. Yesterday it was Yuvraj. Tomorrow someone else … self-regulation and caution should govern ‘moment marketing’ going forward. It is the right thing to do.
Dr. Sandeep Goyal is chief mentor of the Indian Institute of Human Brands (IIHB). He holds a PhD in the study of celebrities.
Campaign India
whatsapp 0 whatsapp 0 Facebook 0 Tweet 0 linkedin 0

Haymarket doubles profits after faster than ...

Media group generated half of annual turnover from US