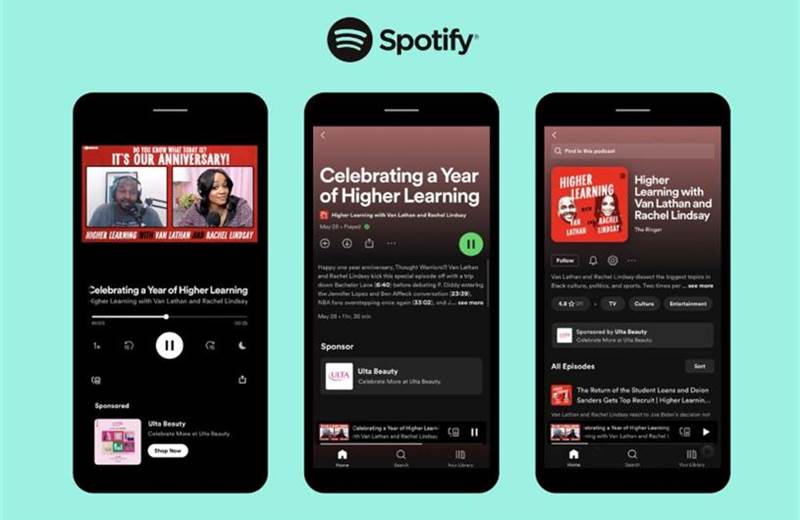 Advertising in podcasts used to be nothing more than a host rattling off a promo code or URL, which listeners may or may not remember to manually input.
Spotify is making podcast advertising more interactive and accessible with call-to-action (CTA) cards, which launched on Spotify original and exclusive podcasts on Thursday. The new ad experience will feature customizable text, bold visuals and clickable call-to-action prompts such as “Shop Now.”
CTA cards appear in the Spotify app as soon as an ad starts playing. The CTA also pops up again later while a listener browses the app after listening to an episode. The clickable ads will be visible for seven days after the audio has played, unless a campaign ends sooner.
The cards are powered by Streaming Ad Insertion, a podcast ad targeting tool that Spotify launched at CES 2020 and includes a digital suite of planning, reporting and measurement solutions.
“We think about these cards as an important step towards modernizing the format — a format that will become more capable over time, as we add shoppable and video and other interactive features,” Jay Richman, head of Spotify’s ads business and platform, said during a press briefing at the Consumer Electronics Show on Thursday.
The new ad experience is already attracting brands like Ulta Beauty, Athletic Greens and Squarespace.
“We know that consumers are largely multitasking at all times. We all are," Christine White, head of content, social and media at Ulta Beauty, said in a press release. "As we think about advertising experiences, we have to look for ways to engage consumers in the moment. CTA Cards enable the consumer to select the moment they want to be discovering and shopping on their own terms, which enhances their experience.”
The new method appears to be effective for grabbing users’ attention and driving traffic to brand websites. In recent tests of the CTA cards, clickable ads drove twice as many site visits as non-clickable ads, according to Spotify.
Ulta, for its part, reached an estimated 250,000 Spotify listeners in a recent campaign, according to White. About half of those unique listeners saw at least one CTA card, including those who saw a card after hearing an audio ad and while exploring the app.
Premium subscribers won’t be able to opt-out of the CTA cards in an effort to help creators. Creators won’t have to do any additional work to activate the CTA cards, according to Spotify.
“Creators are basically creating all this content for free,” Mike Mignano, Spotify’s global head of talk and co-founder of Anchor, said during the briefing. “We’re excited that we can build a more equitable ecosystem, where potentially more creators than ever before will be able to monetize, and some of them even earn a living.”
The push for innovative audio advertising comes as the interest in audio continues to grow. In the U.S., mobile time spent listening to audio is outgrowing time spent on social media, video and gaming, according to eMarketer.
Spotify wholeheartedly jumped on the bandwagon with multiple acquisitions of both podcast content and technology, including its purchase of hosting and ad company Megaphone in 2020. And in December, Spotify acquired podcast tech company Whooshkaa.
With CTA cards, Spotify is also latching onto the social commerce trend that’s taking off on multiple platforms by making it easier for listeners to directly purchase a product they hear about on the platform. Social commerce is expected to have surpassed $36 billion in the U.S. in 2021, according to eMarketer.
(This article first appeared on CampaignLive.com)