Williams is as much a master on court as she is off-court when signing major brand deals and honing her personal brand. Brand experts pick out lessons to pick up from the tennis legend 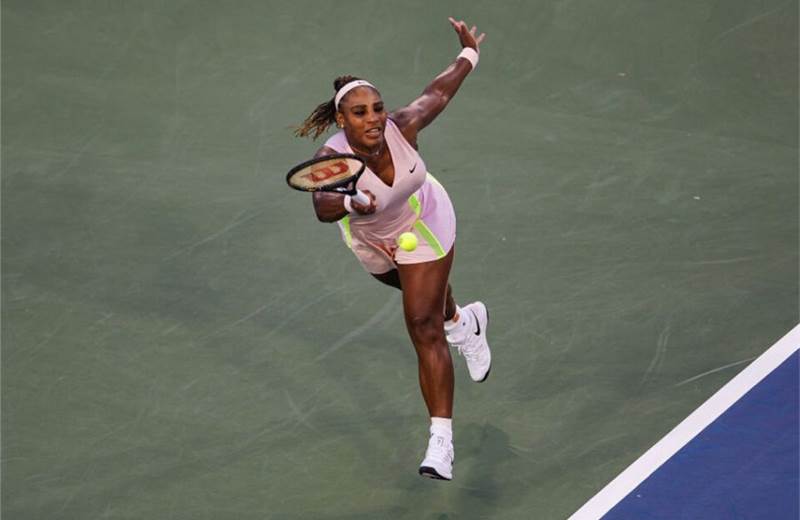 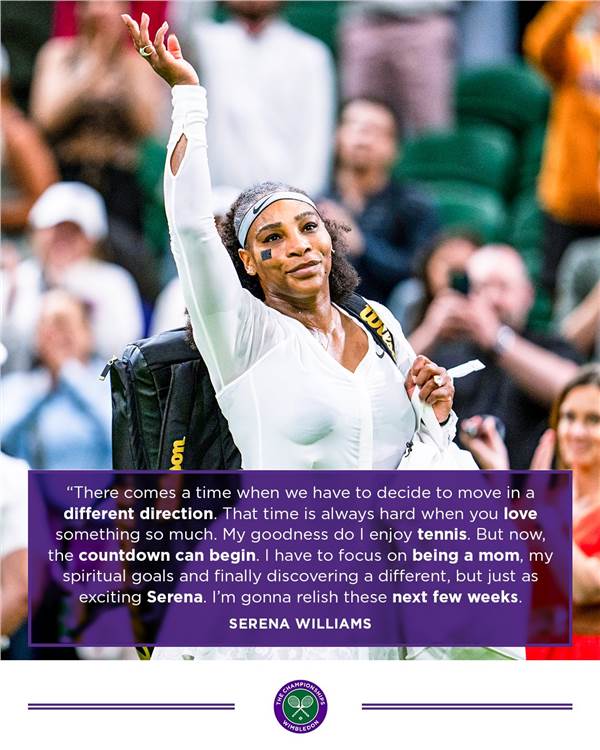 The official Twitter handle of Wimbledon posted a picture of Serena Williams with the above caption.

The 23-time Grand Slam tennis champion and one of the most accomplished athletes in the history of sport, Williams announced in a candid essay for Vogue and on Instagram that she’s ready to step away from tennis so she can focus on expanding her family and pursuing business interests. “I have never liked the word retirement,” she writes. “Maybe the best word to describe what I’m up to is evolution. I’m here to tell you that I’m evolving away from tennis, toward other things that are important to me.”

She did not provide a clear timeline for her finale but hinted that the US Open, which begins on 29 August, will be her swan song.

Over the course of a remarkable career that spanned nearly three decades, Williams, who turns 41 next month, has consolidated an unparalleled track record. She won her first Grand Slam singles title at age 17 back in 1999, and, together with her elder sister Venus, nabbed 14 Grand Slam women’s doubles events. For 319 weeks she was the No. 1 player in the tennis world and returned to the top spot after almost 15 years—a record. She also has four Olympic gold medals to her credit, among countless other feats.

Williams has aced plenty outside of tennis too. Perhaps equally impressive is her skill of turning her sporting prowess into multi-million-dollar deals—to be precise, US$45 million in 2021—largely from corporate partnerships, brands investments, and creative projects.

Her forays into business include lucrative brand partnerships, a fashion line S by Serena launched in 2018 after collaborations with HSN and Nike, a TV deal with Amazon Studios, and an upcoming children’s book deal. She set up a venture capital company, Serena Ventures, in 2014, raised US$111 million in funding earlier this year to invest in “founders with diverse points of view”, according to New York Times. The firm has made 56 investments to date, and three-quarters of the portfolio is female- and minority-founded companies, “because that’s who we are,” she says.

The big day is here! ✨We’re thrilled to announce that Serena Ventures has raised a $100 million fund to power early-stage startups focused on improving our daily lives through innovative products and services.
and invite founders of all kinds to #PlaytoWin. pic.twitter.com/1r2HHHx3gS

Authenticity is perceived by delivering consistently, says branding consultant and CEO of Marquinista, Patricia Soares da Costa. A mentor in global entrepreneurship programmes, da Costa says the credibility of #BrandSerena lies in her consistency—what she conveys to the audience is aligned to her family-friendly, real-life behaviour. “Both on and off the court, Serena Williams follows a seamless pattern of basing her path on values such as family, education and equality,” she says.

When Williams leads, she does so with women in mind. An open advocate of equal pay and women’s rights, the tennis legend puts her money where her advocacy is.

“Nearly a decade ago, shocked by the information that women received only 2% of venture capital money, she acted on it and created Serena Ventures to intervene by angel investing in women of colour entrepreneurs and mission-driven companies," says da Costa. "She now funds several startups, some are unicorns (like MasterClass, Tonal and Impossible Foods), but most companies she supports are run by women of colour and aligned with her career’s hallmarks: athletics, health, and wellness.”

Challenge conventions, own your truth

Williams has challenged conventions and expectations at every turn. Challenging what it means to be a tennis player, a mother, a female athlete, and the greatest athlete of all time.

Dave Di Veroli, chief strategy officer and partner at brand experience and innovation firm Akcelo, says Williams’ tenacity, courage and convictions have enabled her to transcend sport, and become an iconic brand in her own right.

Huiwen Tow, head of strategy at creative agency Virtue APAC highlights Williams’ true allure “lies in her confidence to be vulnerable in front of an entire world audience, and her courage to fearlessly own her truth time again.”

Throughout her trailblazing career which broke Steffi Graf's Open-era record, Williams has tested boundaries on some occasions and crossed the line on others, like the semi-final of the 2009 US Open when she threatened to shove a ball down the throat of a line judge for calling a foot fault—a violation that cost her a point, the match and a record US$82,500 fine.

Her raw outburst during the second set of the 2018 US Open final against Naomi Osaka—a passionate finger pointing exchange with chair umpire Carlos Ramos drew her third penalty of the match, cost her the game, and ended in a US$17,000 fine. But it started a much overdue conversation on the double standards for men and women on-court decorum.

By calling out Ramos for penalising an outburst way less vulgar than profanities hurled at officials and (even at the crowd) by bad boys of tennis John McEnroe and Jimmy Connors before him, Williams initiated an important debate. Why does tennis vilify women for speaking up and considers men as ‘fighters’ and ‘passionate’ in similar competitive fury?

The 2018 incident might have robbed Osaka of a truly well-deserved moment, but brand experts agree it helped Williams emerge a champion of a different league—one that speaks her mind when confronted with what she feels is injustice on the court—not always in the tone the sport traditionally expects of its female champions.

“Serena Williams is a best-in-class case study of how to become an authentic brand. Brands are often obsessed with defining themselves with a long list of positive attributes. What makes a brand truly authentic in this world, where distrust has permeated culture, is the ability to be human,” states Tow.

Audiences can link airbrushed to inauthenticity, be it for an Instagram, a magazine cover or a brand crisis and Williams understands that all too well. Ria Parikh, associate director at Hong Kong-based digital brand consulting firm Imergey says Williams’ biggest USP is the ability to be vulnerable and show up in her imperfections.

“Serena has never shied away from voicing her thoughts, even when there were predicaments, like the controversial loss to Naomi Osaka in the 2018 US Open final or publicly supporting Osaka’s decision following her French Open withdrawal in June 2021," says Parikh. "Williams has always been honest about her feelings, beliefs, and stance. Her 2019 Harper’s Bazaar cover attested to this when she shot it without any photo retouching—something that is totally lost in today's digital filtered life.” 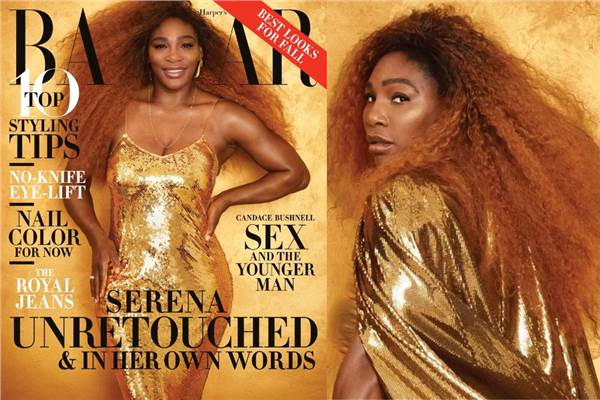 Brands need tenacity to stay on top over a long period of time. Williams became an icon because deep down she has a profound appetite, desire, and talent for winning according to Martin Roll, global brand strategist, Harvard Board advisor and author of Asian Brand Strategy. He says: “Determination, audacity and resilience are ingrained in Williams’ personality and the way she thinks, acts, and reflects. Without those traits, she would not have stayed on top over long time in one of the most competitive sports.”

He adds: “Brands can learn a lot from Williams on winning and the art of winning. When she faced adversity and headwinds—which all athletes do over time—she took charge of the situation and reversed it. For example, when she lost a match or didn’t win a Grand Slam, she came back stronger next time. She is the queen of comebacks. Not everyone has that stellar determination for always aiming to win.”

Tow of Virtue APAC thinks that more than the power of Williams’ serve, is her ability on and off the court to always evolve—tennis superstar, new mother, queen of comebacks, advocate of women’s rights—is what brands need to embrace and learn from.

“Her deep and early investment in the Web3 space embraces an optimistic view of the future, one that is open to possibilities and positive change. Brands need to reinvent and rework how they show up in an ever-changing world. Embracing some of that “what-if” defiant optimism that Serena embodies can help brands make some headway in leading culture and shaping the future,” she says.

Veroli of Akcelo nods in agreement: “Great brands stay relevant by continually reinventing themselves. Just like Apple which has continued to innovate for four decades—beyond its iconic Mac, to revolutionise mobile phones and reinvent the music industry. Serena has forged new identities as a fashion icon, successful entrepreneur, dedicated mother, and advocate for equality. However, she never lost sight of what made her famous: being the most exceptional tennis player on the planet.”

Over time every brand needs to be agile to keep being relevant, energised and differentiated in the minds of consumers. Williams is an example of that, says Martin Roll.

“The Serena Williams brand is very agile and has evolved over the years. The upcoming US Open might be her farewell to global sports, but that is only the end of the first phase of the Serena Williams brand. Her brand platforms and brand equity will allow her to continue to rise and expand," says Roll. "Her legacy will help, but her agility will also be instrumental to stay successful."