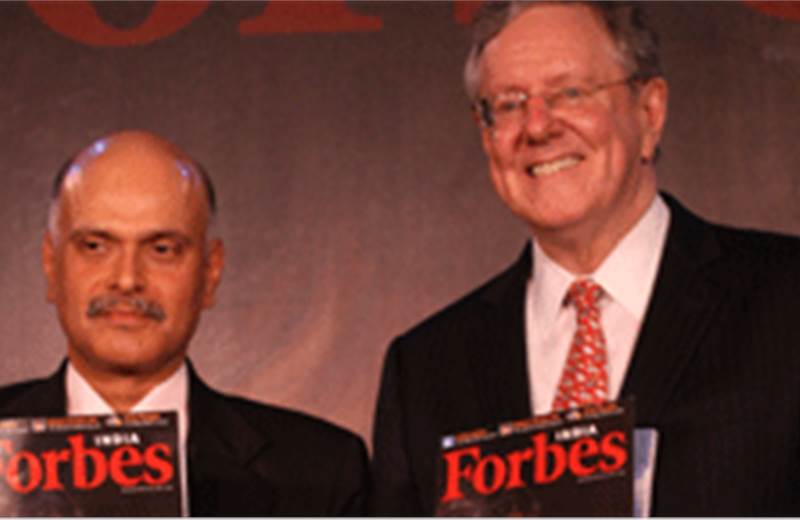 Commenting on the launch, Steve Forbes said: “We are excited to be working with one of India’s leading media groups, Network18, as our partner. I doubt there’s been a better time to launch Forbes India. In the midst of economic doom and gloom, India’s story is one of resilience in adversity and optimism for the future.”

Raghav Bahl added: “The Indian media landscape has had quite a few inflection points in its history. These are points when the rules of the game change and a new language of content emerges and the landscape alters fundamentally. We believe that this will be that inflection point for business coverage in the country. A point which will redefine in India how wealth creation will be understood, how business leaders will choose to lead, and indeed how business will be done. At Network18 we're proud to bring home to you the community that gave birth to business media as we know today, the community called Forbes, the only way the best in business have kept score for over 9O years."

The first issue of the India edition is an impressive 124 page one, with as many as 29 pages of advertising (including two Forbes ads and one CNBC TV18 ad).

For those who haven’t read Forbes (the US edition) earlier, Forbes India is very different from the business magazines that one is used to reading. The magazine is not arranged in the usual ‘sections’; news stories are told through interviews and features rather than through drab reporting. The arrangement will get a bit of getting used to.

'Forbes India', says the editor, Indrajit Gupta in his welcome note, ‘will tell our stories through people.’ The first issue is packed with people, beginning with Lakshmi Mittal in the cover story, Vijay Mallya in a feature, KV Kamath in an interview,  Nimesh Kampani and his exile, Suzlon’s Tanti’s predicament, Jaitirth Rao’s future plans and  VG Siddhartha’s entrepreneurial zeal.

That’s the list of Indian people. Surprising that there is no mention of the new dispensation post-elections and not a mention of a single politician.

The Mallya story requires some constructive criticism. One is drawn to the story, because it is about Mallya. The layout and the story intro promises much but the story is shallow and teaches one nothing, absolutely nothing new. How big a mess is he in? Will he get out of it? If yes, how will he? If not, what are the implications? No answers from the story – and I know nothing I didn’t know. That’s because, according to the writer, ‘Since April, Forbes India has tried to get in touch with Mallya as well as the senior management of his group companies …. The officials have been consistently travelling or too busy to respond.”

One month is a long time to elicit responses for a brand such as Forbes and powered by Network18 – and the story certainly needed responses for it to have legs. And it doesn’t help when ‘Insnider’, on the last page, asks the reader, “How did we know? Oh come on. We’re Forbes India.” Insnider is much required on the Mallya story.

So much for the negatives.

The magazine is an easy read with enough original material to keep one occupied on a Chennai to New Delhi flight. That’s the advantage of the unusual method of presenting news; in the Forbes presentation formats news that one might ‘know’ still looks fresh.

Forbes is fortunate that their India plans were delayed thanks to regulatory issues. The magazine launches at a time when all Indians view the future with well-founded optimism and hope and advertising revenue will be easier to come by than would have been the case six months ago. The cover price of Rs. 50 (cautiously referred to as ‘inaugural price’) eases the pressure somewhat on advertising revenues. The CNBC TV18 ad sales muscle is evident in the mix of advertisers in the first issue and Steve Forbes will go back to his head office celebrating his own entrepreneurial capitalistic streak.