Tata Capital evangelises ‘do right’ position with a musical message

Tata Capital, the financial services arm of the Tata group, has launched a ‘Do Right’ initiative - a campaign that urges parents to inculcate the ‘right’ values in children from a young age, reiterating its ‘We only do what’s right for you’ positioning.

To promote the initiative, the brand has created a signature music video featuring Shankar Mahadevan, Ehsaan Noorani and Loy Mendonsa. Select clips of the music video are running on TV as commercials. The ‘Do Right’ campaign has been crafted by Leo Burnett.

The brand has also launched a website www.doright.in that will act as the main platform for all the initiatives under the ‘Do Right’ campaign.

On the campaign, Praveen Kadle, MD and CEO, Tata Capital, said, “Tata Capital has followed its brand promise of ‘We only do what’s right for you’ right from inception and the ‘Do Right’ campaign is a natural extension of this promise. We believe that by instilling the right values in children at a young age by leading by example, we can truly point them in the right direction and bring about an overall, long-lasting positive change in society.”

Titled Karein Wahi Jo Ho Sahi (Do only what is right), the song starts with a young boy living in a hostel and writing a letter to his parents about his tough life. He places the letter under his pillow and falls asleep. The next morning he wakes up and gets dressed. Along with his classmates, he assembles in a hall where they sing under the guidance of the trio of Shankar Mahadevan, Ehsaan Noorani and Loy Mendonsa. The film then moves on the library where the boy helps a classmate with his studies. His friends then ask him to join them for a game of football. The film moves on to the football field. On his return from the field, he spots an older boy bullying a young child. He and his friends stand up against the bully and help the small child get his snack box back. He walks back triumphant with his friends and realises that the list of children selected for the football team has been put up. He is elated to find his name on the list. At the end of the day, he tears up the letter that he had written the previous night and replaces it with a new letter where he informs his parents that he is happy to be at the hostel. The film ends with the voice over saying “Sahi ka inhe gyaan hoga toh kal pe humein abhiman hoga.” (If they are aware of what’s right, we will be proud of them tomorrow.)

KV Sridhar (Pops), chief creative officer, Leo Burnett, said, “We live in trying times when we hear more about negative occurrences than good news. Even our youth has been infected by this plague of negativity which is being passed on. Perhaps the only way to improve the scenario is to teach our kids the importance of right values. DoRight.in is our effort to induce values among today’s children so that they become inspired artists of a promising future. And who better than the Tata Group to take up such a noble task of promoting the value of doing right.”

The campaign will also be supported by radio, social media and digital marketing. 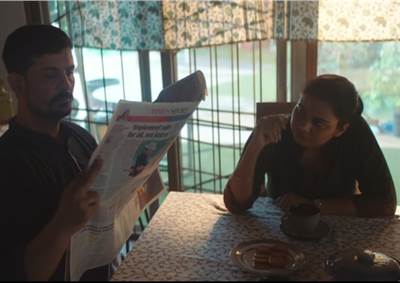 The Times of India celebrates relationship readers have with newspapers with an ode fro...