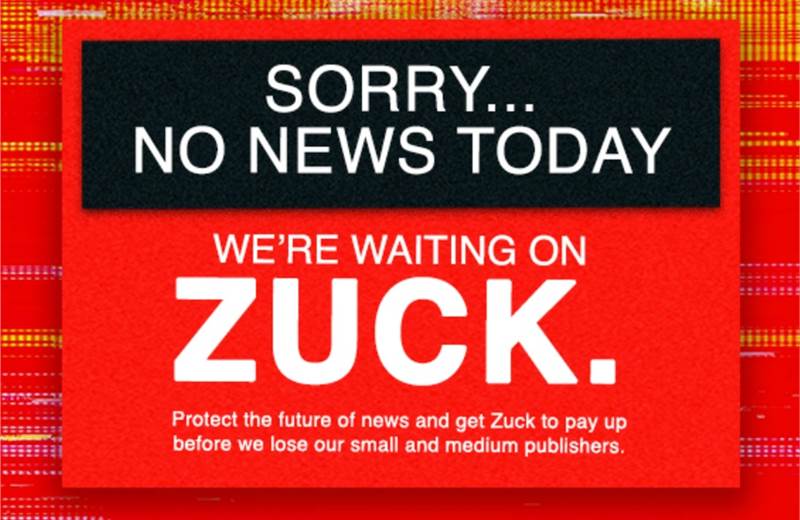 More than 30 independent media outlets in Australia will be taking part today (March 22) in #WaitingOnZuck, a 24-hour campaign during which they will stop publishing news in order to create pressure on Meta to pay for journalism and content that appears on the Facebook platform.

The title of the campaign, created by social-purpose consultancy D.O.A. (Decade of Action), refers to the fact that the publishers are waiting on Meta "to come to the negotiating table and make commercial deals that are transparent, fair, and pay for quality independent journalism", according to a release. The blackout warns of a future without independent news if publishers don't get a fair deal, the organisers say.

The campaign's call to action encourages Australians to email federal treasurer Josh Frydenberg to complain about the erosion of the Australian news media landscape without greater accountability for Facebook to negotiate with independent publishers.

Frydenberg is currently reviewing the effectiveness of the year-old News Media Bargaining Code, which compels digital platforms to negotiate with local media companies. While Facebook has negotiated with large media networks, it has not done so with most independent publishers, according to the campaign.

"The unintended consequences of how this code has been handled is that independent publishers face unprecedented competition from our publishing colleagues who have struck deals," Nick Shelton, founder and publisher of Broadsheet Media, said in a release. "With millions and millions of dollars now being spent on talent, marketing, technology and audience acquisition, independents are finding it impossible to compete. Facebook and Google can pick the winners and losers in Australian media, which is something the Australian public should be very worried about."

Specifically, the campaign wants the goverment to explicitly designate Facebook and Google as platforms that are required to negotiate with publishers.