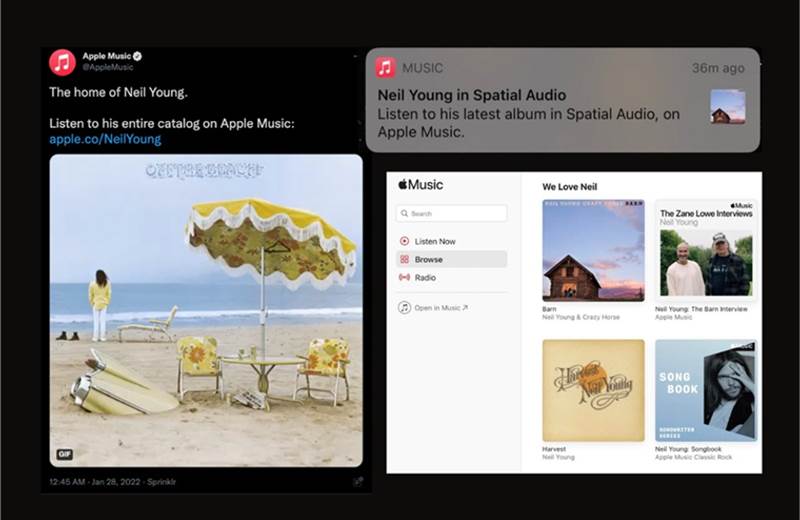 Making the most of Spotify's current run of bad press, Apple Music is attempting to woo users over to its platform, which it is describing as "The home of Neil Young".

Spotify's publicity troubles started earlier this week when Young gave the streaming service an ultimatum – either drop the Joe Rogan Experience podcast or lose his music – due to Young's distaste for the show, which the rockstar claimed had been spreading vaccine misinformation.

In a letter written to his management team and record label, Young wrote: “I want you to let Spotify know immediately today that I want all my music off their platform. They can have Rogan or Young. Not both.”

Spotify's decision to remove his music and stand by Rogan, whose show is the platform's most popular podcast, has provoked an exodus of users from its platform.

With #SpotifyDeleted trending on Twitter, it is now in "crisis mode", with claims its customer service system is completely overwhelmed.

Looking to herd people over to its platform, Apple Music is trolling its rival with tweets, playlists and push notifications, which let people know where they can now listen to Young's entire catalogue.

The home of Neil Young.

Listen to his entire catalog on Apple Music: https://t.co/sUGtz4JbB9 pic.twitter.com/YgRMygUqhi

On Apple Music browse page, users can explore a "We love Neil" section, while it has been pushing out notifications that promote Young's music.

It seems Apple Music isn't the only platform enjoying Spotify's downfall. With the musician trending on its platform, Tidal retweeted the news with: "Love that for us". It also acknowledged an increase in users, tweeting: "Who all new here".

Who all new here pic.twitter.com/BdjwsaiX7X