‘We have a responsibility to promote sports in India’: Abhishek Ganguly, Puma 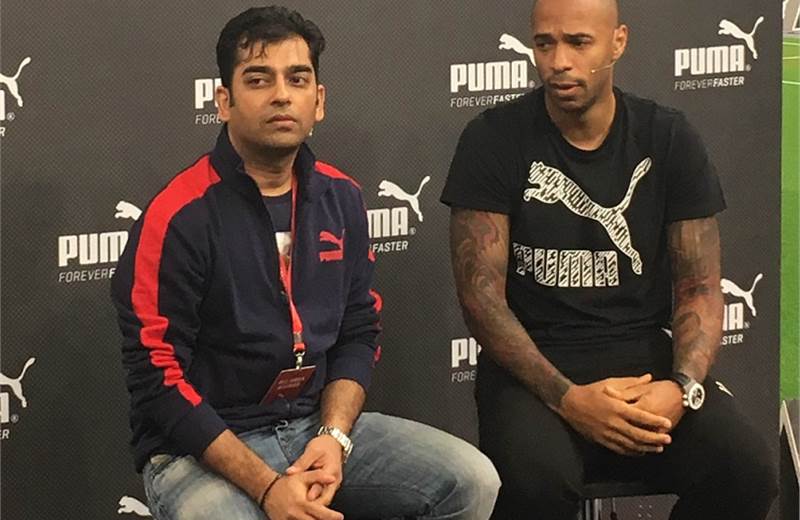 Puma hosted an event in Mumbai with former French footballer Thierry Henry, who used to turn up for Arsenal and Barcelona among other clubs. We caught up with Abhishek Ganguly, managing director, Puma India, on the sidelines of the event, to find out how such events help the brand, and to learn more its marketing activities.
Ganguly explained that the event, hosted during the ongoing Indian Super League, was timed to leverage Puma's association with the tournament. The brand is the ball sponsor for the tournament and also the kit sponsors for the Mumbai City and Chennaiyin teams. What helps too is the fact that the tournament is played around Diwali, a time at which the brand gets a spike in sales, he reasoned.
He said, “The second half of the year, during the festive season would be one season which gets us a spike in sales. This also coincides with the winter in North India; so the winter apparel and heavier apparel has more demand.”
The start of the English Premier League in August is another phase when the brand witnesses a spike in sales of sports apparel. “We kit teams like Arsenal, and so August sees the jersey sales increase. The new fan gear around it also helps and demand is spiked up. Also, by November it’s the marathon season. We partner the Airtel Delhi Marathon too. So there is a demand then for running gear that we see in the two months leading up to it.”
Three types of marketing efforts
Asked about how events like the one with Henry, where a prominent international athlete is brought into the country, deliver RoI, Ganguly pointed to three types of marketing the brand engages in.
He explained, “There are three things behind our investments. One is the immediate return on investment in sales that season. There are a lot of things we do that trigger that. We do product-led advertising, from influencers to media vehicles talking about the product. That generates interest and leads to sales.”
“The second type of marketing is from a brand perspective which establishes your leadership in India as the number one sports brand. That requires the right kind of brand positioning in the minds of the customers. This doesn’t yield immediate ‘return on investment’, but it still needs to be done. We as a brand strongly believe in doing new things. For example, this Thierry Henry event is an experience these fans might never have. The popularity is all across – people are talking about it, they are writing about it on social media and this yields a lot of equity for the brand and we get seen as someone who is not just selling products but also selling stories and concepts. This could shape a young mind and inspire it. These kids playing today, with Thierry Henry, you never know... ten years later one of them could be a champion and change the face of Indian football.”
“The third type is done as a responsibility. Now, we have a responsibility to promote sports in India. One of the key sports for the future is football and the responsibility is to have more and more people following football, watching football and playing it. That’s a process and the way it can be achieved is by creating exciting stuff for them. You work on the grassroots, with grassroot players, or get a legend like Henry to come to India, or do activations with Arsenal Football Club. We also have an association with the ISL as ball sponsors, kit providers for Chennai and Mumbai. So, we are promoting the sport, and that’s our responsibility and in turn we will at some stage benefit. Whether the commercial benefit comes in a year or two or more it’s difficult to estimate.”
Ganguly explained that the brand looks at experiential marketing as the sports fan is passionate and seeking the same. He surmised, “We believe more in experiential marketing. Our market is not traditional. It’s about creating fan and consumer engagement which has an experience related to it and storytelling. If that happens we believe influencers, ambassadors, consumers start talking about it and then the media writes about it. We feel we’ve achieved this with Henry’s visit to India. In my opinion it’s a far better way to engage with our consumers, than doing a newspaper product ad, which we don’t believe in. Sports is about passion and that can’t come in with a newspaper ad.”