“TV can’t carry on like this,” say experts on Sony’s ‘split-screen’ Olympics ads 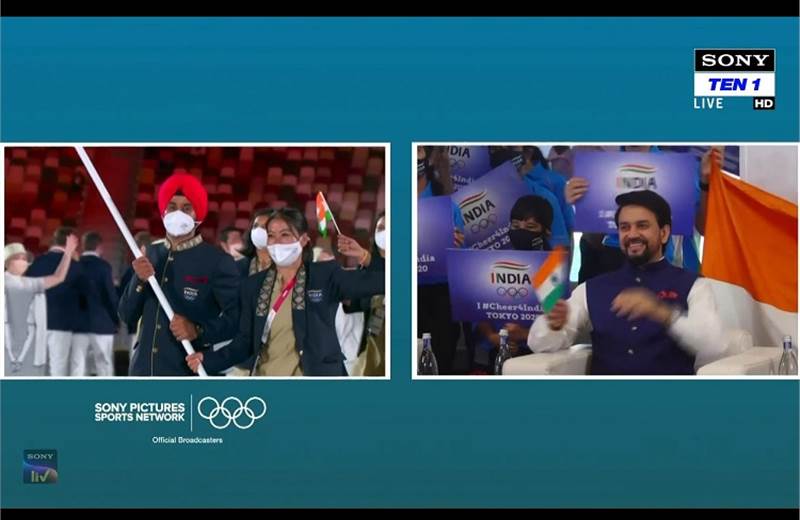 As the Tokyo Olympics’ opening ceremony kicked off, Indian sports minister Anurag Thakur, and broadcaster Sony Pictures Networks (SPN), were being trolled on social media. This was thanks to the channel’s ‘split-screen’ which showed the Indian Olympians in Tokyo and Thakur side-by-side.
As it turns out, this was a trailer of what was to come; SPN’s ‘split-screen ads’ continue during the ongoing tournament.
When Chanu Saikhom Mirabai (Mirabai Chanu) won the country a Silver medal in weightlifting, the split screen returned –  right at the time the medals were being handed out. Only now, viewers were at the receiving end of a Thums Up ad, complete with audio. This meant that the commentary feed from the ceremony was cut out, increasing viewers’ angst.
According to an official release from SPN, brands such as JSW, MPL, Hero MotoCorp, Amul, RBI, AMFI, Visa, Herbalife Nutrition and Lenovo have signed up for this premium ‘cutting-edge innovation’.
Campaign India spoke with experts to find out if this form of advertising is truly clever – or just intrusive.
Bringing in his marketer hat, Mayur Hola, head – global brand, Oyo Hotels and Homes, admitted he had mixed feelings about the innovation. He believed that the broadcaster needs to be careful concerning how this particular inventory is being used.
“It can run during an F1 race where you don't want to miss a second. You can also accept it during warmups before a match or at not-so-crucial moments during an event. However, if it pops up guns blazing during an important moment of a live event, you don't appreciate that one little bit.”
Satbir Singh, founder and chief creative officer, Thinkstr, added that this innovation would perhaps do better during a cricket match, but not at the Olympics. “A split-screen ad during a cricket match is somehow a bit more palatable because of cricket's commercial nature. Olympics have traditionally been considered sacred. Imagine reducing legendary performances by Alice Coachman, Nadia Comaneci, Carl Lewis, Bob Beamon, Greg Louganis or Usain Bolt into a moment to jack-knife a product that you probably don't need, into your life.”
Singh further labelled the split-screen moment during the medal ceremony as ‘deeply disturbing’.
Hola’s views on the Thums Up ad playing during the ceremony matched with Singh’s; he believed broadcasters need to exercise more discretion. “It can't be used at these points (such as medal ceremonies) because it just becomes an irritant. It should ideally be an audio-less split (on the ad side) that features short duration, contextual ads. I can't see how running an ad at like 25% of the screen size does anyone any good, to be honest.”
Sandeep Goyal, chairman, Mogae Group, and managing director, Rediffusion, firmly believed that the split-screen ad was ‘inexcusable’.
“The very sanctity of the content stands debased and devalued. It set a bad precedent and was wholly avoidable,” he said. He further added, “The ad exposure may garner some incremental dollars but it tarnishes the channel reputation by lots more. The viewer also starts to wonder if the only purpose of airing the content is revenue through advertising. Which is what gives advertising a bad name."
Way of the future?
We’ve all seen innovations in the broadcast space with different kinds of segments being sponsored by brands. The IPL, for instance, sees commentators celebrate a six or a four usually followed with a brand name.
Responding to whether ‘split-screen’ advertising will be a part of future sporting events, Hola had a word of caution for broadcasters. “I do hope this type of advertising evolves and is used a bit smartly instead of assaulting viewers in the manner it is now. TV is losing enough people to OTT already and can't afford to carry on this way,” he said.
Goyal signed off stating that it might just be a sign of things to come in the broadcast space.
“Bad precedents, unfortunately, have many followers. I hope this is not an example others emulate but usually the worst fears come true,” he said.
(Sony Pictures Networks refused to comment on queries sent by Campaign India)