Puma warms up for fifth edition of its corporate ‘fun run’

Puma’s Urban Stampede, an annual corporate running property, was launched in India in 2008; Rajiv Mehta, MD, reveals more on the property and other initiatives

Following the launch of its initiative in 2008, Puma is ready for its fifth season of ‘Urban Stampede’, a running platform where teams from corporates compete against each other. The property sports a relay format for the title of fastest running corporate team, thereby acting as a team building exercise. Campaign India caught up with Rajiv Mehta, managing director, Puma to learn more on this property and other initiatives lined up from Puma.
CI: How has the property grown since 2008?
RM: Puma Urban Stampede is the only national running property in the country. First unleashed in 2008, this fun run has witnessed an exponential rise in participation over the years. The run in Bangalore in 2012 saw over 350 corporate teams participate and this year we plan the property in Hyderabad (for the first time) on 3 March and 17 March in Mumbai. Later this year, we plan to take the race to New Delhi in addition to Bangalore.
CI: What’s in it for corporate companies to participate in the initiative?
RM: Running has seen a massive increase in popularity with world class marathons and races being held across the country. Puma Urban Stampede is the only corporate relay race in the country – so it gives people the opportunity to run with their colleagues, form teams within the same company and compete with other corporates. This is a unique format and there’s a lot of pride at stake for the participating companies. Moreover, many corporates are stressing on the importance of staying fit and being healthy and running is one of the most effective ways of achieving that.
CI: As a brand, what benefit Puma derives from this? Does it help create top-of-mind recall amongst your core TG?
RM: Puma is a leading sport lifestyle company – and we believe that high-performance, fitness, style and fashion all go hand-in-hand. Puma Urban Stampede is a competitive run but it is not cut-throat and people enjoy the race. So we spread our brand ethos of joy and fun, while simultaneously driving home the point of staying fit. A property like Puma Urban Stampede targets established as well as budding runners and this definitely constitutes our TG when it comes to the performance segment.
CI: This year who are the major brands participating? And what are your expectations on monetising the event this year?
RM: Registrations have just opened for 2013 and we expect some of the best companies from Hyderabad and Mumbai to come on board. Puma Urban Stampede is purely a brand initiative for us.
CI: How are you planning to promote this event? What are the initiatives on that front?
RM: We are partnering with Runners for Life (started in 2012) - India’s largest and most well-established running company. They have a direct connect with corporates across the country and will be actively reaching out to solicit registrations. We are also very strong on digital. So we will promote the property through our owned online channels such a spuma.com, our facebook and twitter pages, etc. Moreover, we will have launch press events in both new cities with our celebrity ambassadors to announce registrations and get more corporates to sign up.
CI: How many companies do you expect to participate this year?
RM: We’re targeting 500 teams in both Hyderabad and Mumbai.
CI: Other than Urban Stampede, what initiatives does Puma have lined up for 2013?
RM: We have our T7 Creative Factory Built for One event coming up in New Delhi on 27 January. This is an immersive experience where we give our consumers a chance to design and create their very own iconic Puma T7 Track Jackets. We’re also bringing back our successful event Puma Loves Vinyl this year. We have a lot of other plans up our sleeve which we cannot reveal yet but our consumers can look forward to some cutting-edge, high-performance and style-forward products in 2013.
CI: We had recently seen an advertising campaign featuring Yuvraj Singh, Fernando Alonso,
Usain Bolt and Sergio Aguero on air in India. What was the response the campaign received?
RM: Yes, the campaign was to launch our cross-category performance range evoSPEED that we ranged across footwear, apparel and accessories. The TV commercial had a very positive response because it was a fun, light-hearted spot featuring the one and only Usain Bolt with our very own Yuvraj Singh sharing the screen. 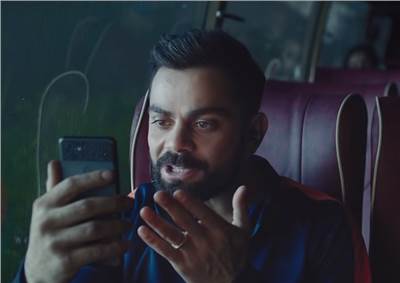