Various local OTT platforms (such as ALT Balaji and MX player) in India boast high viewership figures for mature content—a genre that is witnessing heavy investment and is slated to grow further. In a society that has historically shied away from overt or explicit depictions of sex, is the growth in easily accessible adult content a sign of normalising conversations around sex, or a further reinforcement of regressive gender norms? Does it indicate sexual liberation or a double-down on taboos? Has the male gaze shifted at all?

The kind of content we see and consume not only mirrors where we are currently but also reveals strong social undercurrents, which serve as a guide to gradual shifts in thinking and behaviour. Popular forms of media are often used to help predict the nature as well as the pace of change.

So what does the rise of easily accessible adult content signify? The answers to this question are indicative of friction points, which help uncover changing sentiments and cultural faultlines. It is this push and pull between where we are and what we watch that can help anticipate the next big shift.

One particular point of contention related to this has been visual media’s role in depicting gender and sexuality—specifically the portrayal of women. This is especially evident in content that has sexual undertones, in particular, pornography and erotica. Various feminist authors argue that female depictions reinforce archaic stereotypes such as, being weak and sexually submissive, which is measured mostly by physical beauty and appearance. Such characterisations play into stereotypes and, in effect, do not create critical friction required to further the feminist cause. Thereby making it difficult to drive contemporary female narratives.

With the rise of local and global OTT platforms, there has been a significant increase in the production as well as consumption of mature content. In order to truly understand its role and impact, it is important to place it in the context of other forms of media, as well as understand what it is truly depicting. Is it taking us forward or backward when it comes to conversations on gender and sexuality?

Not so long ago, Indian movies went through a phase where they did not have any depiction of sex—however tame or explicit. These were typically viewed in a public setting (cinema halls or open theatres), which meant all taboos were activated. It was a sanitised viewing experience where you were extremely conscious of what is being watched and with whom.

Of course attempts were made to make movies that were ‘bold’ and not afraid to show or talk about sex. However, most of these faced a backlash and were not deemed culturally appropriate, thereby increasing the value judgements associated with sex and sexuality. There was also an implicit understanding that only ‘B-grade’ actors worked in movies that spoke openly about sexuality, which was often not a role that a respected actor would ever take up.

A report by Inc.42 reveals that platforms such as ALT Balaji, Ullu, MX Player and Addatimes have grown tremendously on the back of their ‘bold, mature content’. In fact, almost all of ALT Balaji’s originals cater to an 18+ audience. From being silent on sex to the sheer volume and variety of mature content that the country is watching today, what is the possible impact on Indians’ relationship with sex and sexuality?

The growing category of mature content might appear to make Indians more comfortable with sex, create space for sex positivity and allow for greater acceptance of hushed conversations. However, when viewed critically, the dominant styles of storytelling and tropes used across popular ‘adult’ shows on these OTT platforms—with almost brazen and “daring” depictions of sex—end up reinforcing regressive stereotypes. This is evidenced through the following:

Thus, while this dominant narrative of mature content on OTT might appear ‘bold’ compared to what Indian audiences are used to, it is possibly not brave enough to challenge the norms governing sex and sexuality. It works through vicarious pleasure, outlandish depictions and mass appeal. But its role in creating sufficient friction points that could change or create new subcultures and conversations on sexuality (especially women’s sexual agency) appears to be minimal.

However, there is an emerging parallel narrative, though still niche, which includes diverse and seemingly more authentic depictions of ‘mature’ topics. This features sexually liberated women, an open acceptance and display of sex without making it voyeuristic, as well as representation of diverse sexualities. Much of the content that gets classified, as such, makes headlines and leads to polarised opinions. However, it is this discomfort that reveals its potential impact, as it challenges pre-existing notions and creates space for newer, possibly more informed conversations, without compromising on its entertainment quotient.

Some of the key themes in this space - Still from movies and shows that have been criticised by certain sections for being too outlandish in their depictions of female sexuality.

Not all of these movies and shows are equally successful, and definitely do not compare to the viewership numbers of those conforming to the dominant narrative. However, their continuing emergence reveals a key tension point: stories and characters that are not as mainstream, that have not been seen before and that reveal insights into previously uncovered people and populations. Though niche, this narrative has given rise to interesting subcultures that promote inclusivity and diversity while demanding better representation.

Social media has emerged as a fertile space for conversations around sex and sexuality. We see evidence of this in various forms on social media, especially when it comes to younger audiences. This includes not only creation of content but active discussion, debate and dialogue that has the potential to steer conversations on sexual liberation and empowerment

Some of Leeza’s popular videos Trends to bear in mind

Steering Clear of Tokenism: A powerful shift in narrative might occur when we open up to diverse creators, authentic stories, relatable depictions and focus on inclusion of non-normative characters.

Stills from a recent Tinder ad that showed a same sex relationship, and OKCupid, which encourages one to find their kind.

Given OTT and social media are the most impactful spaces to have these conversations, there is an in-built element of accountability on behalf of the creators. In a country where there is no consensus on a national sex-education policy for youth, and where violent crimes against women are on the rise, it becomes imperative for this content to apply a responsibility filter. We see this in Durex’s partnership with Vice, Finishing School, which is a space to talk about sexuality, leaving pressures and preset rules behind. Targeted at young adults, it has a series of videos including 'Sex education for the next generation' and 'Breaking down the sexual pleasure gap'. 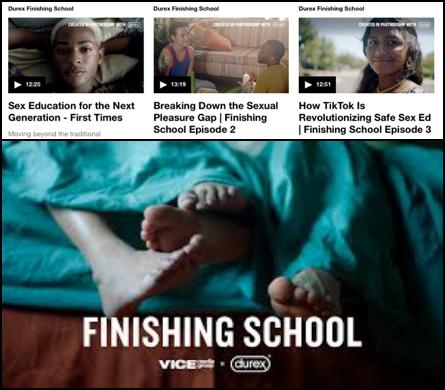 Beyond viewing the content, there is a need to engage the audience with conversations on what they saw, how it made them feel and whether they related to it. There should also be an effort to create a space for the community to interact. Again, we see evidence of this on social media.

Using apps as an avenue for sex ed and dispelling myths, various young doctors and influencers globally are acknowledging the reach of apps such as TikTok and Spotify and using them to speak to younger audiences.

There exists potential to collaborate with sex-positive influencers and help partner in the creation of content. Examples include

Photographs from some sex positive content channels on social media.

Opinion: Unpacking conflict and tensions across ...

Opinion: The more we see ourselves through tech, ...

Watch the film conceptualised by Bullet On Wheels here

Joins Jitender Dabas and Unmisha Bhatt on the overall jury