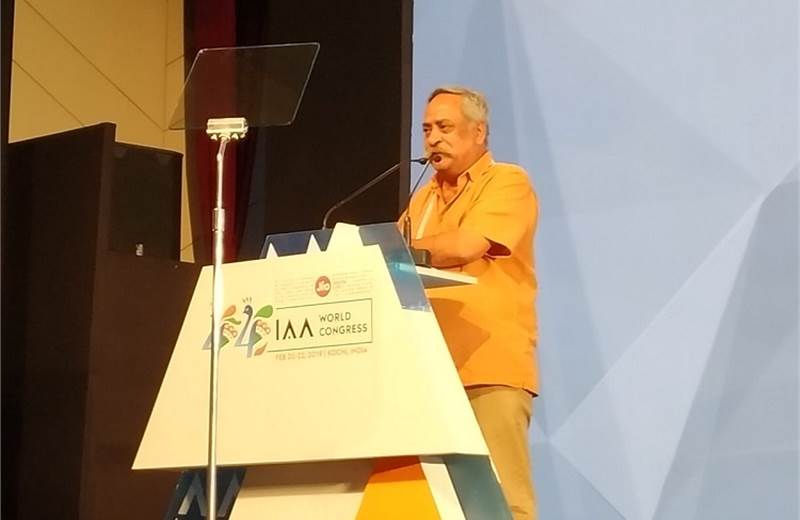 When Piyush Pandey took stage at the final session of the IAA World Congress on day two, he admitted that he was standing between the audience and the bar.
Hence, Pandey kicked off proceedings taking a light hearted dig at Bollywood icon Amitabh Bachchan's insistence on addressing the theme of the Brand Dharma as Brand Dharm. He said that now onwards he would end up calling his friends Sharma and Varma as Sharm and Varm. But he would quickly change gears to leave the audience misty-eyed with a showcase of advertising from India and Thailand that would tug the deep insides of the heart.
Pandey spoke about the sustainability of human relationships which are under threat in a digital world.
Speaking about his paint client of nearly three-and-a-half decades, he said that in the past, Indian parents would insist on a three-bedroom house, as the child needs privacy. Now he said, people are asking for open door homes, as technology has robbed families of real conversations.
"Human relationships are not expressed," he said. Taking a deeply personal example he said that, "Emotional support is as good as medical support."
He wondered aloud, "Are we talking to each other enough or caught up in a digital world?" and added that, "personal interface can never be matched by FaceTime".
"Our Dharma comes from the learnings and experiences of our predecessors and ancestors. It makes us a good human being, a friendly neighbour, a responsible citizen," he said moving on to start his showcase with a Google ad on Indo-Pak relationships, adding the he was wondering if it was appropriate to showcase it in current times. But Pandey was confident that these times are temporary.
Google India-Pak
He added that brands must create advertising that works both for the society and themselves and make society a better place to live in.
Brooke Bond
He lamented that in current times, the expression of love is in sending parents to senior citizen homes. He said that brands had a responsibility to ensure that life goes on and help people enjoy the journey of their life.
He showcased a couple of commercials from Thailand to drive home the point of caring for parents.
Thai Life Insurance
C.P. Group