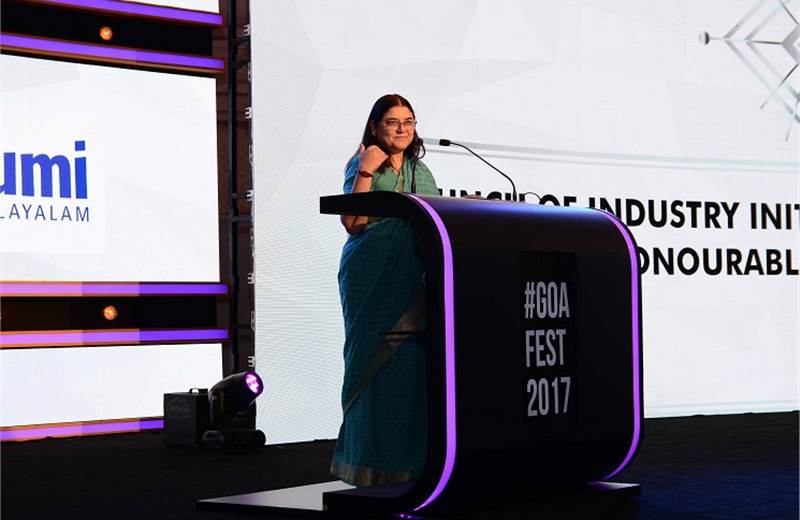 ‘Push women rights through advertising’ was Maneka Gandhi’s message to the advertising fraternity.
The honourable Union Cabinet Minister for Women and Child Development was speaking at the Knowledge Seminar on day two of Goafest 2017 after handing over the award for gender sensitivity to Shilpa Chaudhary and Ayushi Rastogi from Havas Worldwide.
She began her talk by getting into the roots of why women are subjected to violence.
“One reason for that stems from the fact that powerless men, who are probably facing some sort of issue themselves, are looking for someone who would be weaker than themselves. They think women don’t have a recourse. If a lady goes to the police, they’d probably tell her that she’s facing the trouble for some fault of her own. In fact in some of the cases we get, we find that killings happen around two years after they’ve been complaining to their parents. The parents fault their own daughters and urge them to do things differently,” said Gandhi.
Gandhi also blamed feature films for the same. She said, “Romance starts with eve-teasing. Then, the hero fights with a villain and finally wins over the lady. It began 50 years ago and still continues to happen.”
Another reason she cited was women being fewer in number. “When women become less, you see them being married at ages that are as low as 12. The ministry has put forward ‘Beti Bachao’ to help against this and within a year we have seen results. The ratio between women to men has changed from 830 to a 1000, to 910 to a 1000 in just a year in Haryana.”
Gandhi also spoke about ‘One Stop Centres’ that have been introduced to help women facing violence. These centres are equipped with a doctor, policeman, lawyers etc and any woman can ring up or visit it if she faces or anticipates violence of any kind.
She also called in the industry to help her in developing an app. The app looks at women safety and along with the police alerted with the press of a button on a mobile, Gandhi wants it reach out to 10 civilians who are in that area so that they could reach out and help the lady.
Regulating matrimony sites, social media and sexual harassment at workplace act
Gandhi also stated that her team is regulating matrimonial sites and got them to follow a code. This was in response to women who had posted their advertisements on these sites and got lewd comments for the same.
On social media threats, a hashtag ‘#IAmTrolled’ has been created and women are encouraged to use that and complain against threats they receive on social media. Gandhi has the support to Facebook, Twitter and the police to track the people who send out the abuses.
Gandhi further explained about a ‘sexual harassment at workplace act’, for which she’s looking to get the support of the finance ministry and get all companies to have a team for this on their audit.
Create content, push women rights
Gandhi has requested the advertising fraternity to create content where women rights are pushed. “There is a need to talk about rights that include girl only schools, girl sports, menstrual hygiene, working women hostels, safe public spaces, increased maternity leave, safe transport and more through advertising. Look for ways to push this in for advertising of fans, etc. One advertisement that did this well was for Nirma. You can mix messages, and push in a message so that women can go forward. Ads can go further than films.”
She surmised with a message for everyone by saying, “Respect women irrespective of them being fat, thin, ugly or beautiful or anything else. Make beauty less aspirational. We need to respect women as they are. In fact we must have respect for everyone and always be kind.”