Musk assures advertisers that Twitter ads won't be linked with any inflammatory content, saying: "Let us build something extraordinary together"

After months of legal drama, outrageous memes, and the will-he-won’t-he circus that puts the best rom-coms to shame, Elon Musk has finally closed the US$44 billion acquisition of Twitter.

More important for advertisers, is what future changes to the platform will look like and how brand friendly it will be.

Musk has gone on record to say that he “hates advertising,” but that doesn’t change the fact that he needs the ad dollars. 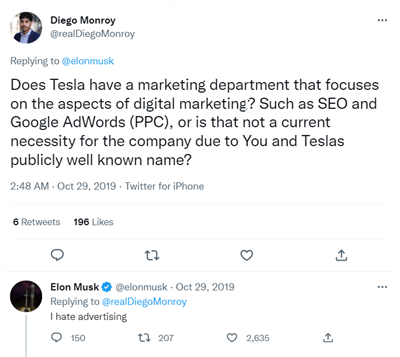 Since April 2022, when Musk first started flirting with the idea of buying Twitter for US$44 billion, the chaotic deal became one of the biggest stories in advertising. The tech billionaire’s intentions to soften content moderation, crusade for “free speech” (implying more trolls) and openly share his contempt for advertising have been top concerns for brands.

In a May 2022 Financial Times interview, Musk went on record to say that he would reinstate former President Donald Trump’s account which has remained indefinitely suspended after linking Trump's comments to the January 6 Capitol riot. If that were to happen, it would be the red line for several blue-chip brands, said Kieley Taylor, global head of partnerships at GroupM to The Wall Street Journal. Taylor also said around a dozen of GroupM’s well-known consumer brand clients have told the agency to pause all their ads on Twitter if Trump was to return, while several others are on a wait-and-watch mode.

Agency executives have understandably been worried about the ripple effects of Musk’s actions on Twitter's digital ad ecosystem. Earlier Facebook (2020) and YouTube (2019) had been targets of advertisers boycotting social media platforms over rampant allegations that the platforms didn't do enough to steer clear of unsavoury hate speech.

But now in a message to advertisers, Musk is singing a new tune. In his first publicly tweeted memo to advertisers after the acquisition, he said he is buying the company to “have a common digital town square, where a wide range of beliefs can be debated in a healthy manner.” He added Twitter “cannot become a free-for-all hellscape, where anything can be said with no consequences!” In addition to following laws, Twitter must be “warm and welcoming to all.”

Lecturing marketers that low-relevancy ads are the equivalent of spam, while high-relevancy ads can actually be content, Musk further informed brands that "Twitter aspires to be the most respected advertising platform in the world."

On October 27, Twitter’s chief customer officer, Sarah Personette also reassured advertisers that she had a discussion with Musk on brand safety.  “Our continued commitment to brand safety for advertisers remains unchanged,” she wrote. “Looking forward to the future!”

Had a great discussion with @elonmusk last evening! Our continued commitment to brand safety for advertisers remains unchanged. Looking forward to the future! https://t.co/B7NFJhD2hq

Musk has reasons to not destabilise Twitter’s ad business.

Meanwhile, the looming threat of a recession in 2023, the shaky results of Meta, Snap Inc., Alphabet posting lower-than-expected results for the September quarter give more fuel to Musk to not immediately implement any drastic changes in the ad department. Because even if he bought Twitter “for the future of civilisation” and not to “make money,” there’s a limit to how much even Musk can lose.