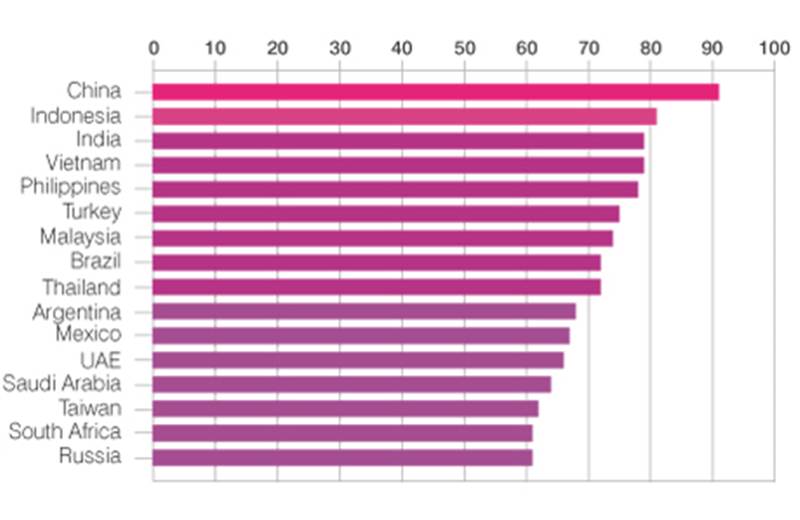 China's high income (top 25 per cent) group in China lead the world in social engagement, followed by Indonesia and India, while the least socially active are 55 to 64- year-olds in Japan, according to GlobalWebIndex's Social Engagement Benchmark report.

GlobalWebIndex is an ongoing global study into the internet consumer's attitudes. Launched in July 2009, it has since delivered seven waves of research covering more than 152,000 internet users in 31 countries.

To count towards the Social Engagement Benchmark rankings, consumers have to have carried out each task in the last month. Each key area—participation, creation and brand involvement—is scored out of 400 and the marks are added together and then converted to a percentage of the maximum 1200 score, which is then weighted to 100 point measure. The Benchmark is platform neutral and measures total active use of social media rather than usage of specific global, regional or local platforms such as Facebook, Twitter or weibo.

The report found that consumers in fast-growing economies are more likely to use a social network or a microblog, upload a photo or video or review a product or brand than consumers in more mature markets.

In emerging markets where millions of people are coming online every year, social media is a natural part of the internet experience. Despite significantly lower internet penetration in markets like India, Brazil and Russia all have larger numbers of socially engaged consumers than Germany, the UK or Japan.
Other countries lagging behind Asian social powerhouses are the US, Sweden, France and the UK which are viewed as mature markets that are technologically advanced. The report reasoned that this is because online activity in these markets was developed before social became mainstream and is therefore less integrated into everyday use.
While specific demographic groups may exhibit a higher or lower engagement rates than the market as a whole, market differences are consistent regardless of age, said the report.
“What this report reveals is that we need to rethink how we classify countries when it comes to social media," commented Tom Smith, founder of GlobalWebIndex. "Thanks to this high engagement, social media reaches more of the total population [in emerging markets]. There is a huge opportunity for brands to connect via these channels but it’s not always in the markets where they think it is."
Updated to include top 10 lists: