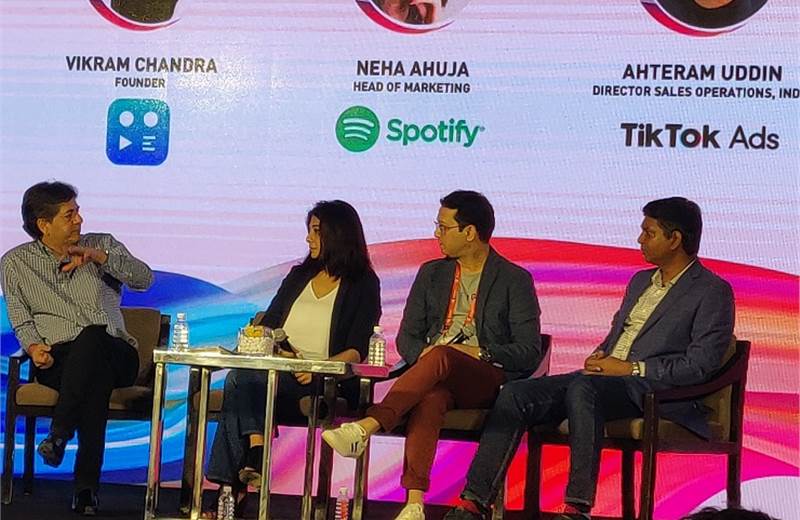 A panel consisting of Ahteram Uddin, director – sales operations, TikTok Ads India, Bhaskar Ramesh, director – tech, FMCG, auto, media and entertainment, Google, Neha Ahuja, head of marketing, Spotify, and Vikram Chandra, founder, Editorji, discussed content consumption trends in India.
Chandra who moved out from television media to set up a news content company, set the context for the session by speaking about how he felt the quality of news on the medium was starting to deteriorate, which made him leave it to launch Editorji.
He then asked his co-panelists about how consumption was changing.
Ahuja said, “We have been seeing this in the past two-three years. Content democratisation is happening as things within the digital ecosystem are changing. We’re also seeing personalisation thriving and that’s what we do at Spotify.”
TikTok’s Uddin spoke about how short attention spans of users is the game changer and short form videos is where the digital landscape is heading.
Google’s Ramesh elaborated, “What has changed in the last year – content/video has become a movement. It has ceased to be a genre. We’re seeing this happen every day at YouTube too. Video has become a lot more helpful and relevant. When people are making purchases, 80 per cent of them refer to a video. The moment of truth happens after seeing a comparison or watching a video from an influencer. Video and digital has become a daily habit. This makes things move. There was a report by BCG globally, which stated that 800 billion dollars will move to the top 15 per cent companies which can offer personalisation at scale.  We are moving from a precision era to a prediciton era.”
Uddin added, “It’s all about intent marketing. Digital is the most measurable medium. The dollars are moving to a more accountable area. Marketers want to catch buyers and consumers when they’re in the right state of mind. It’s easier on digital. It’s convenient and measurable too.”
Micro boredom
A much used phrase by TikTok’s Uddin during the panel was 'micro boredom'.
Elaborating about this, Uddin said, “When people are bored for a couple of seconds they pick up phones, see it for a bit and put it back. It’s an interesting space for advertisers. Audience needs an instant gratification. I’m surprised to see how well advertisers have responded to this.”
On the topic, Bhaskar added, “Clearly short form is something we are seeing youngsters pick up. The insight of micro boredom may be wrongly interpreted. On the one side we talk about low attention spans but the fact is that we have unlimited time to watch a series on Netflix. It’s about what we want to watch and the relevance of it. As India has moved from a data deficit to data surplus country, users have a massive choice and it’s about the right offering. I feel that India has been a storytelling nation for thousands of years and video is tapping into this trend. There are short form trends but long form is here to stay. In fact all forms will co-exist. Indians love stories and they don’t have a time limit.”
He added, “News was always consumed in a snacky manner. Take the user lens – if some news interests me, I have unlimited time for it. We need to all have a user first approach. Different consumers will have a different approach. With broadband being connected to TVs, the big screen is going to come back.”
Regional and vernacular
The panel’s last talk point was about the emergence of regional and vernacular media.
Ramesh said, “Yes, regional has been a trend for the last three years. The moment the internet hit the next 200 million users, we figured that video has no language. Nine out of 10 new internet users are non-English users. The regional users are finding their content on video. Also helping is voice search. So people are getting comfortable. “
Uddin added, “Yes, regional is big for us too. We’re seeing videos and content coming up from the smallest parts of the country. It’s all hyperlocal and people found that connect with the content.
Ahuja spoke about the patterns in music consumption.
“We started with English and Hindi and have other languages now. Punjabi (songs) are number three now, ahead of Tamil. Punjabi isn’t being consumed just in northern India. In fact, the Punjabi wedding playlist was consumed most in Ahmedabad in October.”