Adland should stop trying to save the world and start selling

It's time adland returned to its raison d'être. That’s according to the author and creative director Steve Harrison, who argues agencies must rediscover their commercial purpose in order to play their part in the post-pandemic economic recovery and reclaim the respect of the boardroom 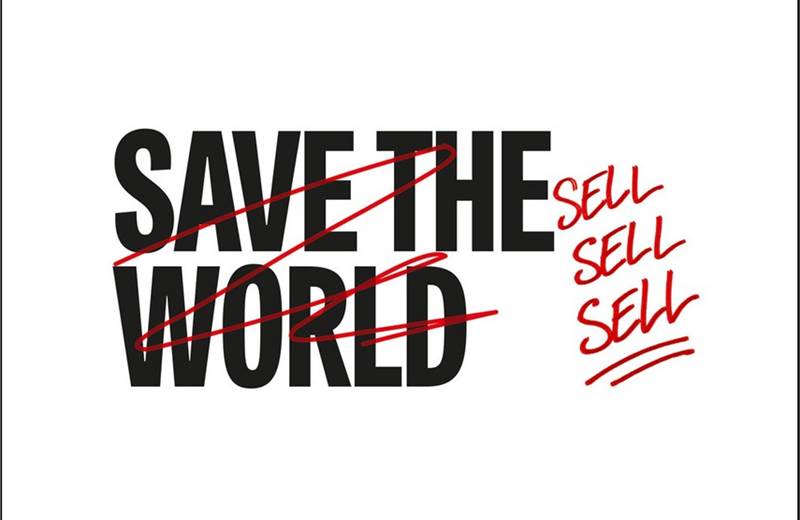 Our economy is being eviscerated by Covid-19. You see the open wounds not just in the one million individuals who’ve already lost their jobs or the 250,000 businesses that will close this year, but in the soaring rates of suicide and shoplifting among our fellow citizens.

Yet our industry seems oblivious to this crisis and the unique role advertising can play in bringing jobs, wages, growth and social healing.

In Campaign’s December/January edition, none of the 24 adland luminaries who wrote about “The year ahead” mentioned the pandemic recession or the part we can play in recovering from it.

Indeed, over the past 12 months, Nigel Vaz excepted, I have not seen one industry leader make the case for advertising’s commercial purpose and the economic and societal value it brings.

No-one seems interested in selling our clients’ products to our fellow citizens.

The IPA recognised this problem before the pandemic began, and declared a “crisis of creative effectiveness”. But to little effect. Demand generation is no longer where it’s at.

There are several reasons, but there’s one that has thus far not been addressed: our progressive politics. This is not the left wing of the old social-democratic variety. We adlanders couldn’t tell Clause 4 from Santa Claus. Instead, we’re fixated with identity and grievance politics.

However, while shifting from political to cultural left, the enemy remains the same: free market capitalism. It’s cited as the root cause of the problems faced by the ethnic/gender/racial communities we now champion. Add the climate crisis to the charge sheet, and it’s clear why adland no longer wants to stoke the engines of capitalist consumption and growth.

Indeed, that would be inimical to our new raison d’être: saving the world.

In this, we’ve allied with global conglomerates that make soap and ice cream to set the moral compass of the laggardly masses – and we’re now attempting to seize a commanding role in society that far exceeds anything dreamed of by the so-called master manipulators of the 1950s and 1960s.

We inhabit a different world from the mainstream

This “Revolt of the Elites” (and, as Sam Friedman and Daniel Laurison’s The Class Ceiling tells us, ours is an elite industry) was first identified by Christopher Lasch in the mid-1990s. As he had it: “Simultaneously arrogant and insecure, the new elites regard the masses with mingled scorn and apprehension.”

Lasch’s observations have been updated by the likes of David Goodhart (The Road to Somewhere) and Elizabeth Currid-Halkett (The Sum of Small Things). Both explain how members of a university-educated, metropolitan clerisy have severed their connection with the people beyond their bubble.

According to American academic Matthew B Crawford: “Instead of feeling bound up in a shared fate with one’s countrymen, one develops an alternate solidarity that is placeless.”

You can see adland’s detachment from the mainstream in our indifference to the crisis that’s gripping the country and our refusal to even discuss ways we might ameliorate its impact.

Alas, this disconnect has been developing for years. And it’s laid bare in Andrew Tenzer and Ian Murray’s three award-winning studies that show “the same basic pattern being reinforced time and time again. Advertisers and marketers diverge from the mainstream on every major psychological, behavioural and attitudinal framework that we have explored. They inhabit two different worlds.”

But far from realigning, we’ll keep promoting our social purpose strategies until the mainstream gets “on the right side of history”. Proponents cite surveys that indicate support for these strategies. But remember the old research adage: “Ignore what people say. Watch what they do.”

Of course, respondents say they’re “conscious consumers” and boycott brands that exploit workers, pollute the environment and avoid taxes. Then they pull out one of their several Apple devices and ping another order to Amazon (the UK revenues of which rose by an astounding 51% in 2020).

Don’t get me wrong, when it comes to exploitation, pollution and taxes, our clients should be encouraged to pursue CSR or environmental, social and governance (ESG) as corporate strategy.

Moreover, issue-related marketing strategies can be highly effective. So, it’s not either/or when it comes to social and commercial purpose.

But, in concert with lazy or impressionable chief marketing officers, agencies are splashing the woke-wash all over their briefs. For them, social purpose provides an easy solution to the puzzling complexities of our business. 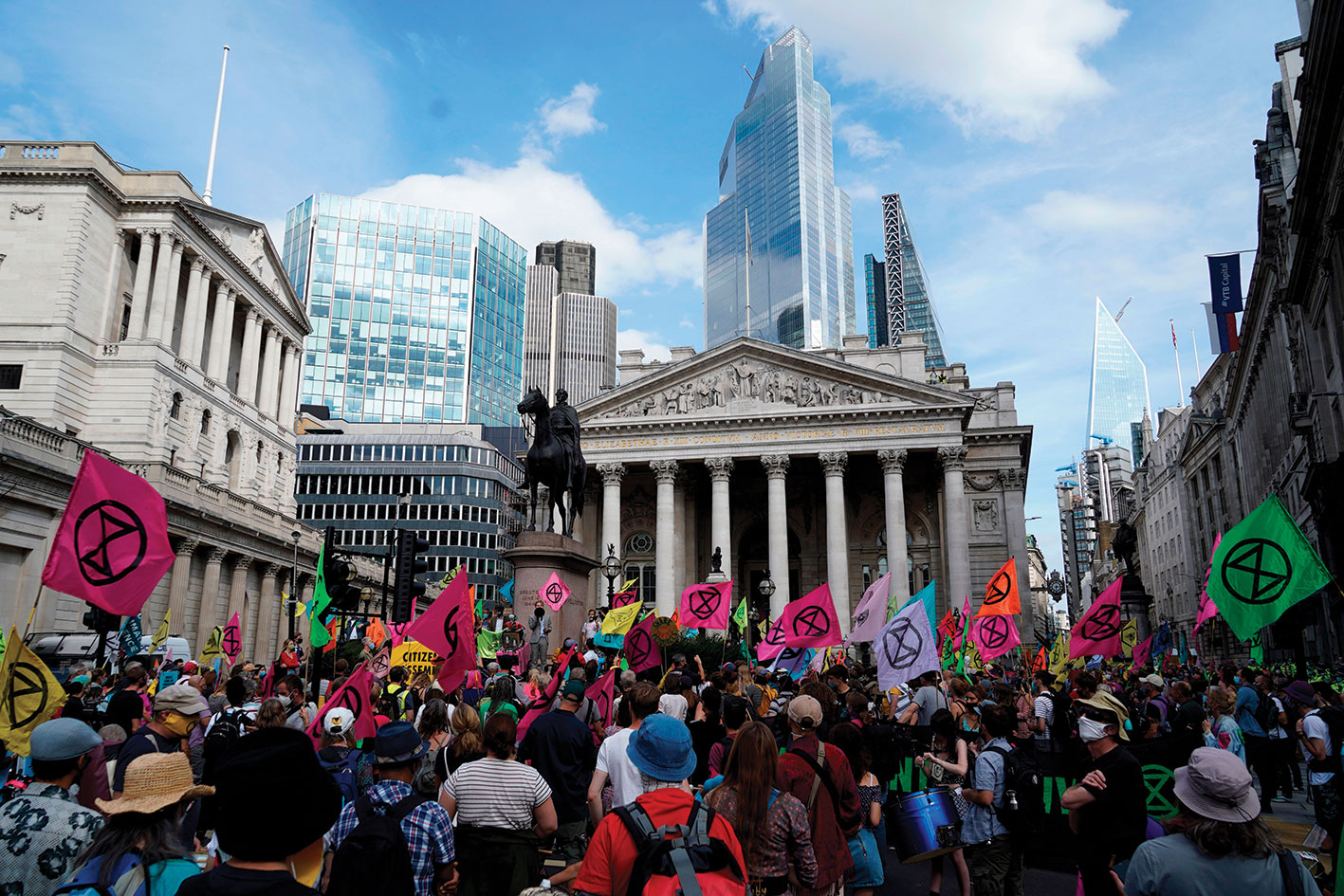 “Conscious consumers”: activists from the Extinction Rebellion climate change group protest outside the Bank of England in September 2020 (Getty Images)

The careerists and the activists pushing purpose

It is also driven by careerists who’ve got to the top by supporting inarguably worthy causes. We all know peers who are three parts executive creative director and two parts social justice warrior. They owe their success to the personal brand they’ve built around that carefully cultivated duality.

Then, pushing the agenda forward, are activists who head advertising’s institutions. For them, the ends justify the means. For example, in a recent podcast with writer Ben Kay, D&AD chairman Tim Lindsay says he accepts that Pencils are given to purpose-driven work that “undoubtedly is a scam”.

Worse still, the world’s most august awards body actually sees green and woke-wash as “a step in the right direction”. This despite Alan Jope, chief executive of Unilever, warning: “Woke-washing is beginning to infect our industry. It’s polluting purpose. It’s putting in peril the very thing which offers us the opportunity to help tackle many of the world’s issues. What’s more, it threatens to further destroy trust in our industry, when it’s already in short supply.”

Jope is right. And last November’s Ipsos Mori poll showed we’re trusted even less than our politicians! So the fact that we feel we have the moral authority to lecture (and then lie to) the public beggars belief.

Surely it’s better that we embrace our beneficial role and help clients – and their employees – survive the pandemic recession.

Why our commercial purpose comes first

To achieve this, we should use social purpose judiciously, asking: “Will it help achieve my client’s fundamental need: demand generation?”

We must also realise that if there’s no sale, there’s no profit. And without profit, then the corporate commitment to CSR or ESG will, despite everyone’s laudable intentions, ebb away. Moreover, if we fail to make the economic case for advertising, then client-side CEOs will continue to divert budgets to the direct and digital sales activation shops. Indeed, if we appear uninterested in our fundamental task, selling, then those CEOs will question whether they can trust us with anything. And then pick up the phone to Accenture, Deloitte or S4 Capital.

Meanwhile, we’ll continue congratulating ourselves on our ability to work remotely (oblivious to how privileged we are to be able to do so), condemning ourselves for our lack of ethnic and gender diversity (while ignoring the age, class or cognitive varieties) and consoling ourselves with our yellow Pencils (for work which may never have run).

In short, while our fellow citizens fight for their lives and livelihoods, we’ll drift further to the margins of British business and the collective consciousness.

Go woke or go broke?
Harrison on the good and bad of social-purpose ads 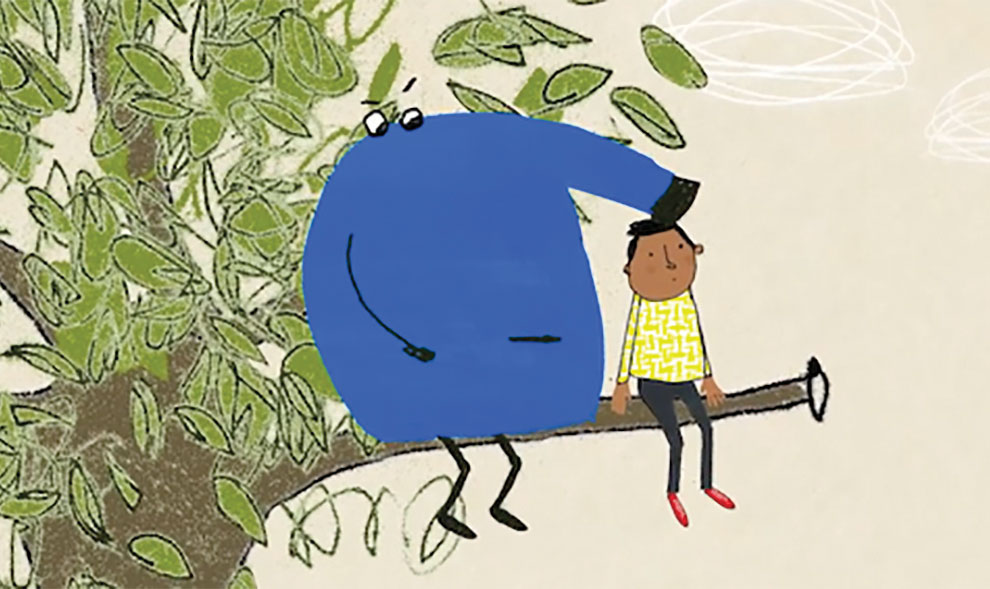 We’re all agreed that businesses should take CSR and ESG seriously. For example, Aldi’s link-up with Neighbourly and Marcus Rashford (pictured, above) to donate 10 million meals to families in need in 2021 is wonderful. And I am not against ads that have a social purpose. But they must a) reflect a deep-seated and genuine commitment to that cause, and b) build the brand, generate demand and drive profitability.

Alas, they are few and far between, as these recent forays into the shallow end of social purpose suggest. 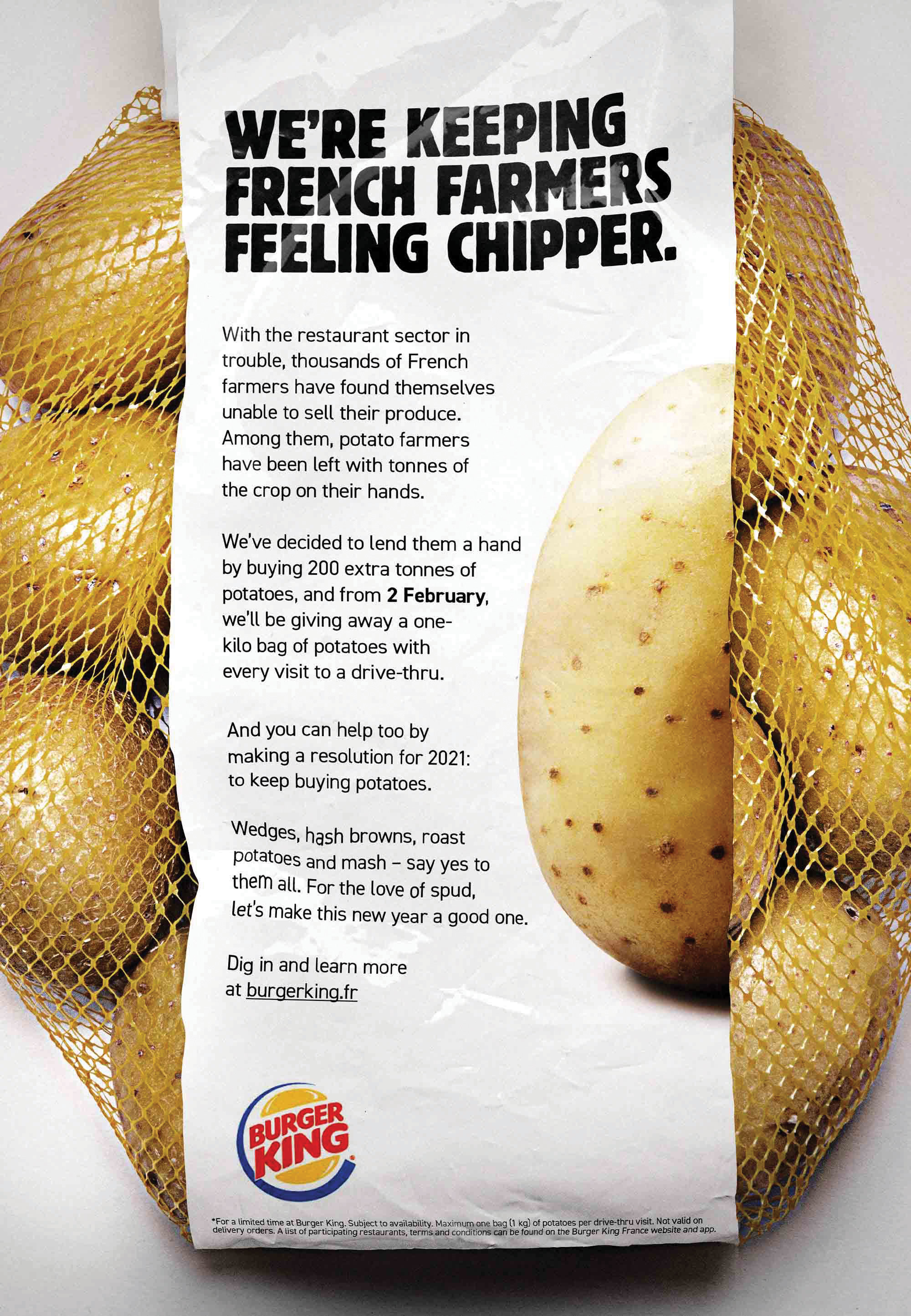 Burger King announced it was helping French farmers by buying 200 tonnes of potatoes and giving them away to its customers in 1kg bags. If you Google it, you’ll find the image of the packaging with the headline: “We’re keeping French farmers feeling chipper.” It’s a publicity-seeking, empty gesture: last year, French farmers produced 6.8 million tonnes of potatoes. Burger King’s 200 tonnes is the produce of a small, six-hectare farm. Also, the fact there’s well-crafted copy on English language packaging of a French promotion indicates this is aimed primarily at the international awards juries.

During last month’s Super Bowl, Chipotle, the Mexican-themed restaurant chain, ran a spot entitled: “Can a burrito change the world?” It is investing $1 million a year over five years to “remove barriers and enable the next generation of farmers and ranchers to succeed”. Out in the real world, The New York Times estimated that the federal government spent $46 billion on farmers last year. Chipotle’s $1 million wouldn’t subsidise a 500-acre pig farm in Iowa. 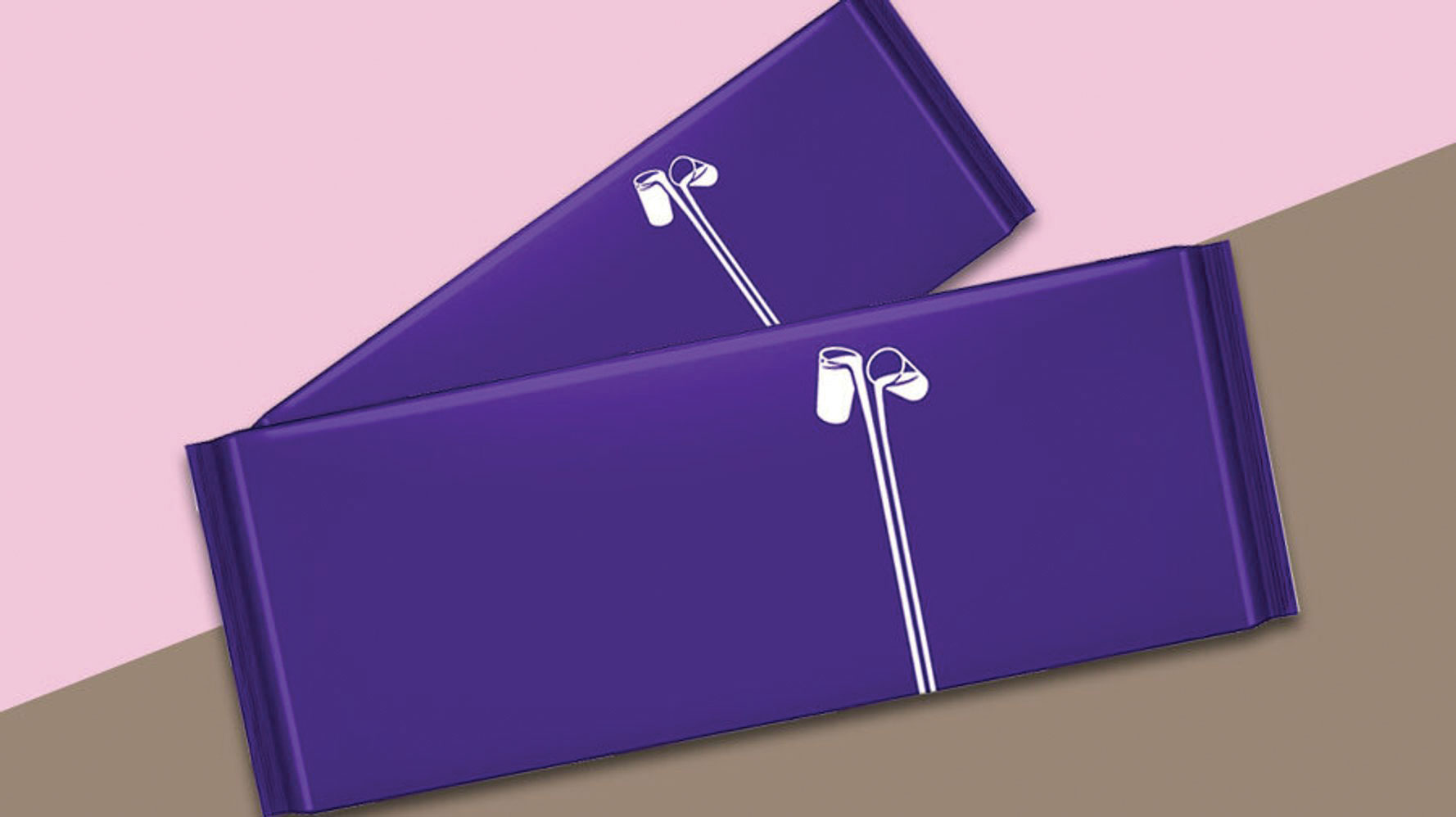 In September 2019, Cadbury Dairy Milk joined with Age UK to tackle the crisis of loneliness among the elderly. “Donate your words” ran until February 2020. Just as Covid-19 struck. According to Age UK, millions of pensioners were “crushed” by the lockdown. But, aside from making a donation to the charity, Dairy Milk was silent on the issue for six months, preferring instead to air a brand-building film about lockdown in May 2020.

This piece was the one of two articles that ran in Campaign's March 2021 magazine edition, asking whether advertising has lost its purpose. Read Paul Feldwick on why adland needs to prioritise popularity over high art, and the industry's reaction to both pieces.

This article first appeared on CampaignLive.co.uk