WPP: Greenpeace is ‘right’ to protest but we will still work with energy clients 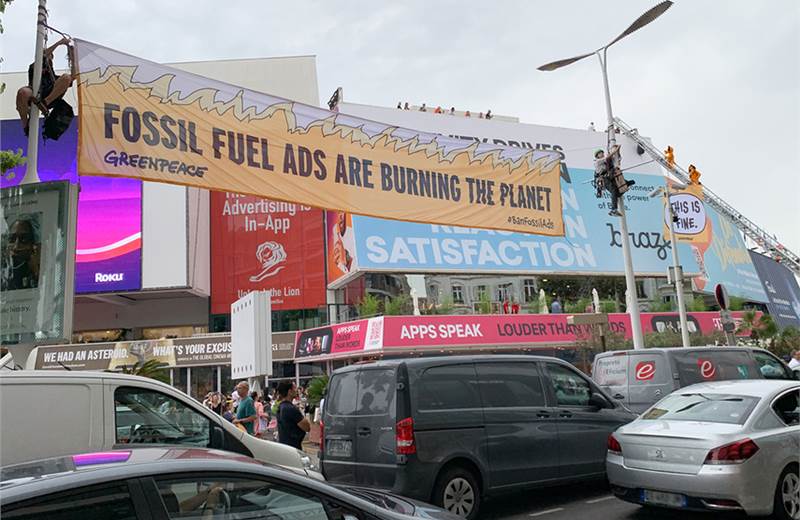 WPP has defended its work for major energy companies, saying it will continue to help them with their marketing, after Greenpeace staged a series of protests at Cannes Lions, including sending a flotilla of kayaks to WPP’s rented beach space.

Mark Read, the chief executive of WPP, told Campaign that Greenpeace was “right” to highlight the climate crisis but he insisted energy companies needed to be “part of the solution” and they should be able to “market” to consumers “in a fair and accurate way” about the steps they were taking to move to a lower-carbon economy.

Greenpeace was involved in three incidents at Cannes Lions as the environmental group called for a ban on “fossil ads and sponsorship” and urged advertising companies “to cut ties with the fossil fuel industry”.

First, Gustav Martner, a Greenpeace activist and former Cannes Lions-winning creative, interrupted the awards ceremony on the opening evening in the Palais, the main festival venue, on Monday. Then dozens of protestors descended on WPP’s beach on Wednesday afternoon and more protestors used a truck ladder to scale the Palais on Thursday morning.

Read, speaking at the end of the five-day festival, when WPP was named the most creative company after winning the most Lions awards, described Greenpeace’s protests as an “inconvenience”.

“They are right to highlight the problem of climate change and the impact of carbon on the economy,” he said. “At the same time, we all have a role to play in reducing the levels of carbon and I think energy companies have to be part of the solution as much as anybody else.

“Our job at WPP is to help them talk in a fair and accurate way about the steps they are taking to move to that lower-carbon economy.”

WPP’s clients include BP and Shell, although Read did not cite any of them by name.

He pointed out WPP, the world’s biggest agency group with about 109,000 staff, will only work with energy clients that adhere to certain global standards on carbon emissions.

“We have said we don’t want to work with any energy company that seeks to frustrate the Paris Agreement [the commitment to reduce carbon emissions and limit global warming to no more than 1.5 degrees compared with pre-industrial levels],” he said.

Read added there was a consumer benefit for energy companies to be able to market their products and services.

“If energy companies can’t market or talk about the steps that they are taking to move to a low-carbon economy, how do consumers choose to work with the companies that do?” he said.

“At the same time, we can’t engage in greenwashing [on behalf of energy companies] – we can’t misrepresent what they do. We train our people and educate our people on marketing standards.”

He admitted it was “a challenge” for WPP to get the balance right between helping energy companies to market their products and avoiding greenwashing.

It is thought that all of the world’s big six agency groups have energy clients. Britain’s WPP was among the most visible at Cannes Lions because it rented a private beach – as it did in 2019, the last time that the festival took place in-person before the pandemic.

Japan’s Dentsu was the only other major agency group that had a beachfront space. Technology giants including Google, Meta and Spotify rented most of the other prime spots.

Asked if he had concerns about security at Cannes Lions after Greenpeace was able to stage the protests, Read said: “I don’t have a concern about the way that it has been handled. The organisers and the police have handled it very well.”

The authorities were “excellent at communicating to us about what would happen and responding to the event” at WPP’s beach, in particular, he said.

It is understood that WPP took a conciliatory approach and let the Greenpeace activists use the bathroom facilities after they arrived at the beach.

The WPP chief did still express some concerns about safety: “In the current environment, you do worry about making sure our people and our clients are safe at events like this.”

Asked if Cannes Lions planned to review security, a festival spokesperson told Campaign: “We entirely respect the right to peaceful protest and our main concern is always the safety of Cannes Lions attendees and the wider city of Cannes.

“Last week’s Greenpeace activities were managed by the police and the City of Cannes and at no stage did the protests impact the delivery of the event.

“We regularly review policing and security arrangements for the festival with the City of Cannes, including how to manage peaceful protests by non-violent groups such as Greenpeace and any peaceful associate organisations they may be in partnership with.”

Sustainability featured prominently on the speaker agenda at this year’s Cannes Lions. At a session called “By 2030, every ad will be a green ad”, a global coalition of leaders from major brands, agency groups, tech companies and ad associations committed to expand Ad Net Zero, the UK ad industry’s sustainability initiative, to the US and Europe.

However, Greenpeace said the ad industry was not doing enough to combat climate change, explaining why it wanted to “call out advertising agencies” at Cannes Lions and accusing them of being “complicit in spreading disinformation around the climate catastrophe and promoting their [clients’] polluting products”.

The environmental campaigning group said: “Since the Paris Agreement at least 300 awards have been given out in Cannes to advertising for more air travel, to oil companies that greenwash and to ads that make cars with polluting combustion engines more desirable.

“PR and advertising holdings and agencies such as Accenture, Publicis, WPP and Edelman, present in this event, have recently announced they will commit to achieving ‘carbon neutrality’ (net zero) and internal sustainability policies.

“However, all these firms continue to work for the fossil fuel industry helping them promote their image and the alleged environmental virtues of oil and fossil gas and, as a result, block the rapid climate action required.”