Show & Tell 2022: We wanted to have fun with e-commerce - Kunal Dubey, Cleartrip

Cleartrip’s chief marketing officer and the founder of Talented, PG Aditiya, shared how they made headlines using The Times of India, during the festive season sale 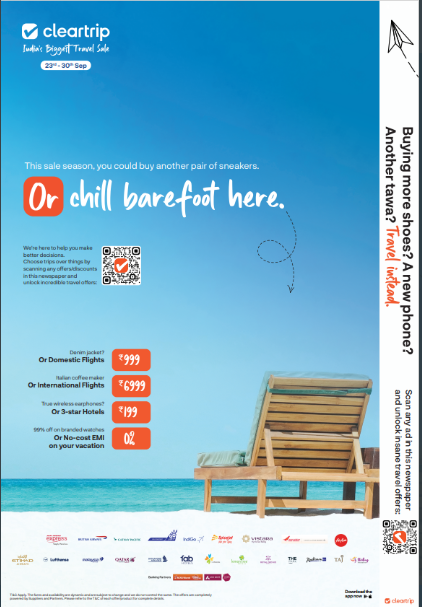 He explained that the idea behind the campaign was to redirect people’s interest to travel, with the same purchasing power they had for buying other things during the sale.
Even with not much to work with, he recalls how Aditiya and Manek came back with an idea in the next 36 hours.
Aditiya read out the print ad to the audience - “You can buy these bed sheets or curtains, or you could fly to Kochi. This season, you could buy a pair of new sneakers, or chill barefoot at another destination. We’re here to help you make better decisions. Choose trips over things, by scanning the QR code for any ad in this newspaper and unlock incredible travel offers instead.”
He shared how the scanning would take the user to other corresponding travel deals with the same money that they intended to use to shop.
Dubey stated that the top management of Flipkart (Cleartrip's parent company) knew about the strategy of the campaign, due to permission-related reasons.
Highlighting the intent that the brand wanted to create with this idea, Aditiya stated, “When every brand is trying to come and tell you to buy their products over its competitors, for Cleartrip to come and say - ‘all of this, or a trip to Bali’ was a completely different mental state that we wanted to take people to. If Cleartrip was able to take even 10% of the consumers’ purchasing power, our work was done.”
Aditiya agreed that culturally, the teams aimed to show how print, even for e-commerce brands, was a huge drive for print overall, but not for creativity.
“Print ads all feel similar overall and only those people generally interested would go for it. This is not a print ad, as much as it is a print-led conversation opportunity,” he added.
The brand sparked tons of conversations about how it won print during the festive season.
Speaking about this, Dubey said, "The beauty for me was that we were not competing with other travel companies. It was about getting in there and having fun, hijacking and spoofing all the e-commerce campaigns that were going out and managing to still be relevant on the same occasion.”
He also added that the brand chose the print medium since the idea would be lost due to the barrage of impressions that get thrown on digital anyway. He added, “This was not just to grab attention, but was also a starting thread for conversations. Even today, I don’t think there’s a better medium than print, to start a new conversation.”
The teams stated that the complete idea was locked and executed in 18-19 days.
Manek added, “At Talented, we speak a lot about how social ideas are not just the ideas that are created on social, but the ones that end up on social. Anything that happens offline has a viral opportunity. The power of the traditional medium gets so much more powerful when there is a social leg to it."
She also pointed out how people keep forgetting that everyone has a second screen today and how nothing is only offline.
Speaking about the consumer reactions to the campaign, she added, “We got so much love for this on social media. Organically, everyone was talking about it on LinkedIn and Twitter. That is the power of doing something on the traditional medium, that doesn’t rest on traditional alone.”
Commenting on the overall conclusion from the campaign, Dubey said, “Just random conversations like these are the starting points of something which will make a brand work.”