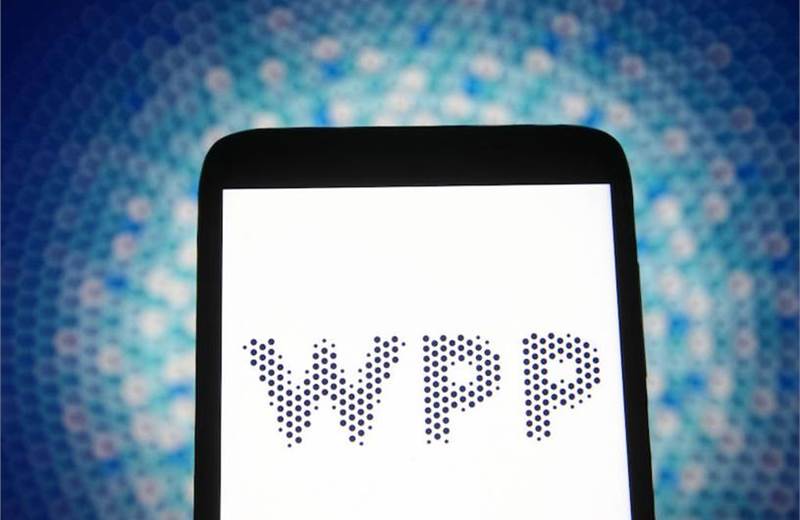 According to R3’s 2021 New Business League tables, released Monday, global pitches increased 53% in revenue in 2021 to represent $3.9 billion, led by massive reviews from clients including Coca-Cola, Unilever and Mercedes-Benz.

It’s a trend that’s playing out regionally as well. In the U.S., new business pitches increased 21% year over year to represent $1.3 billion in client spend.

But as agencies compete for bigger accounts, there’s not necessarily much more revenue on the table. According to R3, total revenues attached to global business accounts increased just 9% globally and 7% in the U.S. in 2021, meaning firms are pouring a ton of resources into winning new business without as much to gain.

“Increasingly, the AOR is dying and the smartest agencies are pivoting their services and their talent mix to reflect this,” said Greg Paull, principal and founder at R3. “For every consolidation to a holding company, there are another four or five other clients looking to build a more flexible roster and bring new agencies into the tent.”

Last year was a good one for new business at WPP, which ranked top of the creative and media New Business League tables both in the U.S. and globally.

Globally, WPP scooped up an estimated $404 million in year-to-date new business revenues when it won the majority of Coca-Cola’s global account in December. VMLY&R also did well, ranking third on the global creative New Business League table, behind Havas Worldwide, for work won in Asia. And Ogilvy came in fourth for creative wins globally, despite losing the Instagram global creative business to Johannes Leonardo.

On the global media front, WPP agencies took the top three slots for new business wins. MediaCom ranked top with wins including MedTronic and Bosch; Mindshare came second by scooping up Loan Depot and Kyndryll; and Wavemaker pulled in the number three slot with wins included Zwift Global and Foodpanda.

Coca-Cola also tipped the scale for WPP in the U.S., where the holding company ranked first for creative wins with an estimated $103 million in new business revenue.

“WPP has had an outstanding year, and our series of wins in many of 2021’s biggest pitches is testament to the hard work of our amazing people,” Mark Read, CEO of WPP, said in an email. “I’m incredibly proud of our achievements in 2021, and topping R3’s new business leagues across the board – for holding company, creative and media – demonstrates our unparalleled offer to clients and our ongoing partnerships to create extraordinary work.”

Globally and in the U.S., Publicis Groupe came in second behind WPP for overall holding company rankings, with 899 wins at $559 million globally and 62 wins at $238 million in the U.S. 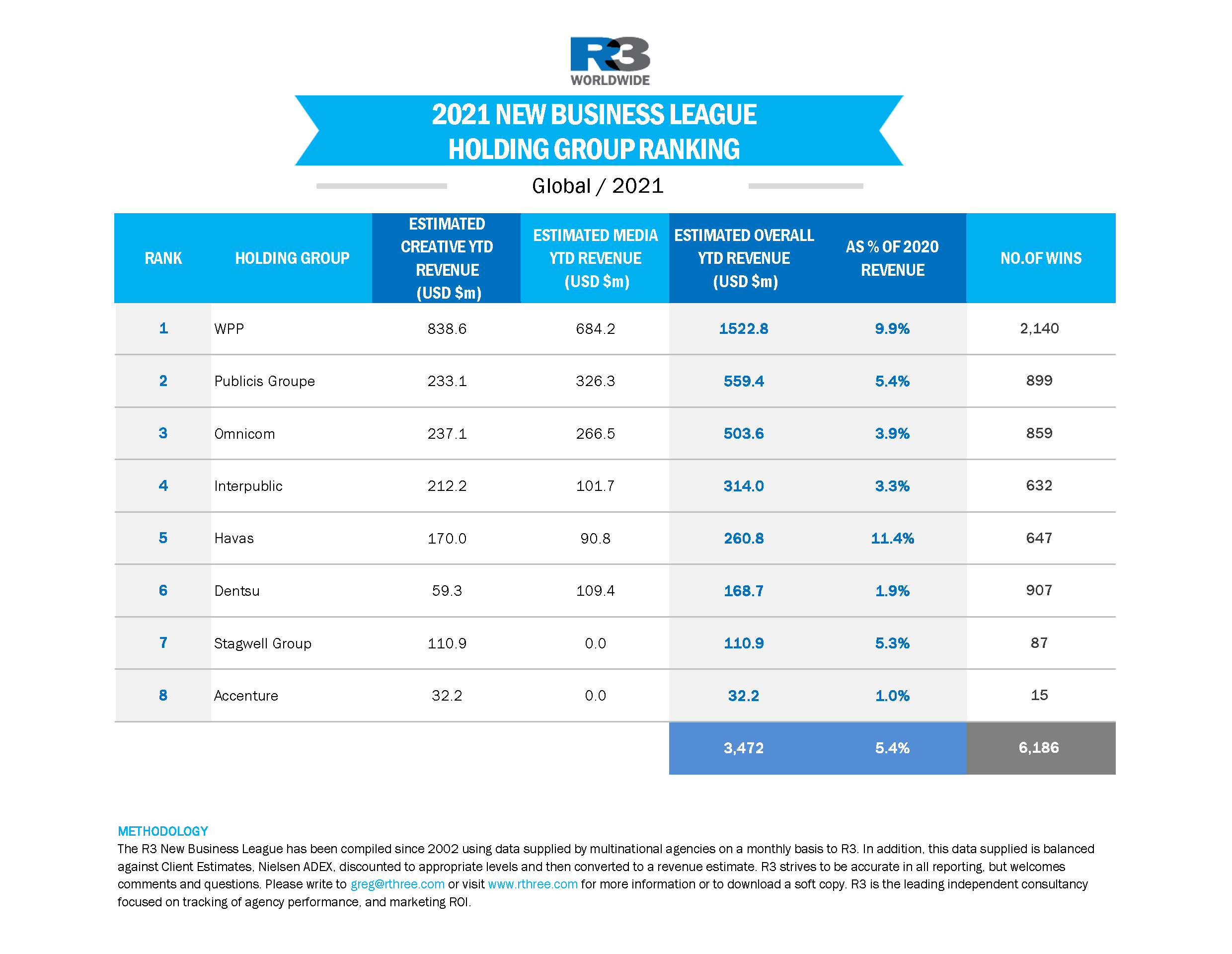 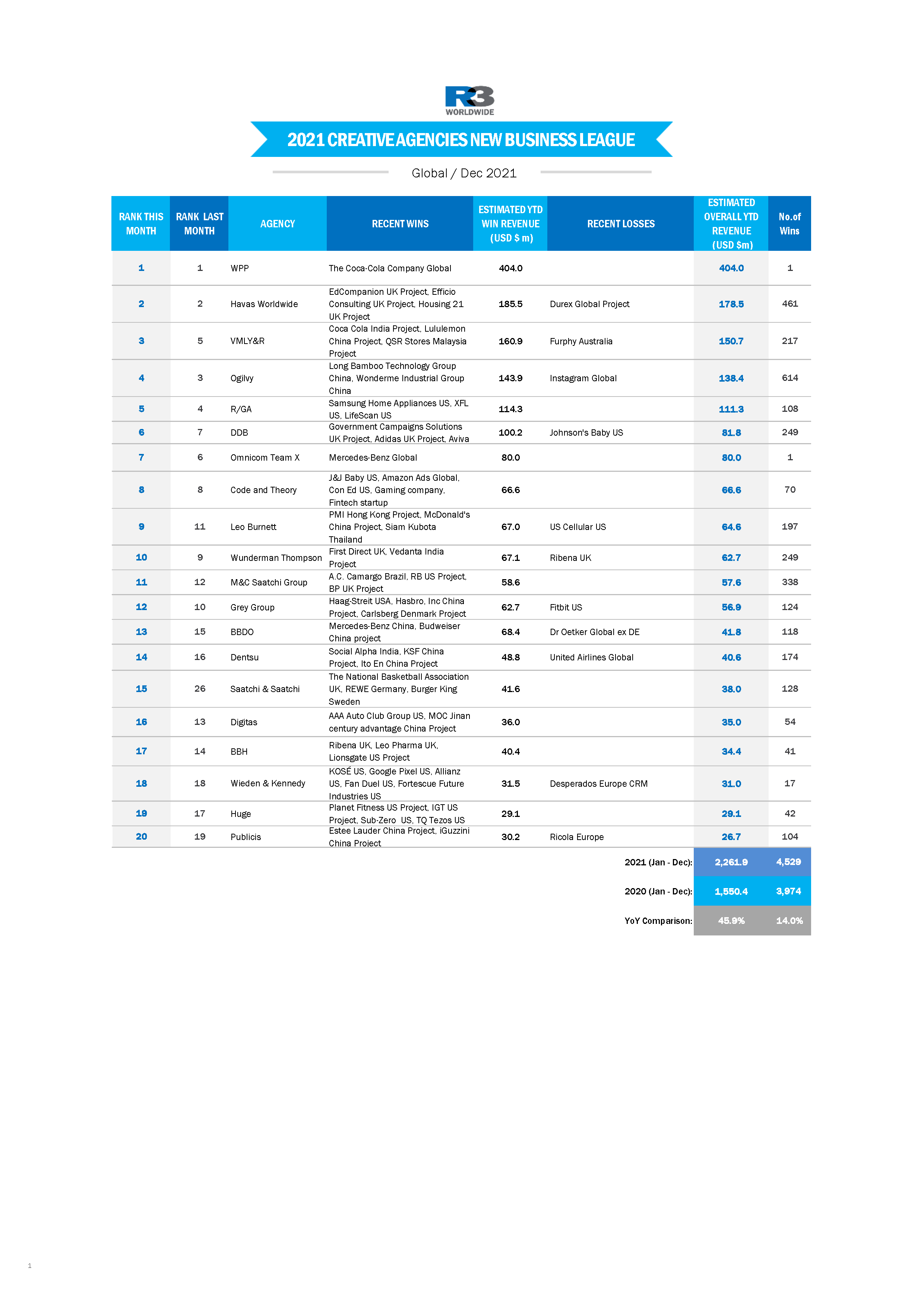 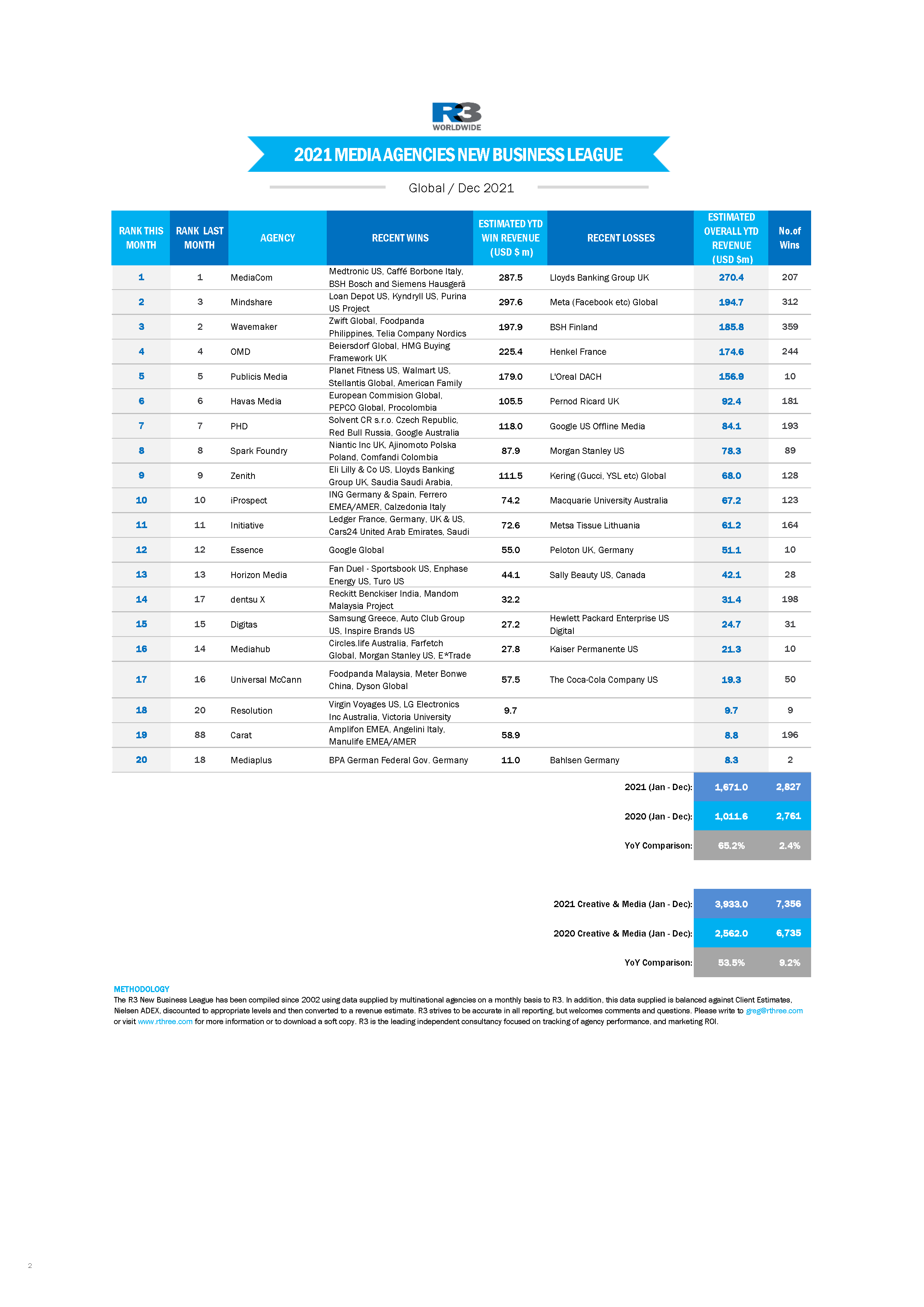