Budweiser India’s marketing strategy is proving to have some significant hits and misses this year. The brand has yet again found itself walking on thin ice, this time for its #StrongerTogether influencer-led campaign.
The backlash followed right after Budweiser India reached out to its audience via several influencers, asking them to help secure a vaccination spot for their respective domestic workers, watchmen, drivers, gardeners and other support staff. The post included the participating influencers posing with one of their staff members.
However, netizens did not receive the campaign well, taking to social media to express disappointment. They believe the campaign was ‘casteist’, ‘tone deaf’ and used marginalised, vulnerable groups for a gimmick.
Aishwarya Subramanyam, one of the influencers approached by the brand, put up an Instagram story highlighting that the move was just a barter – it had promised influencers ‘six beer cans’ and ‘one cool t-shirt’. 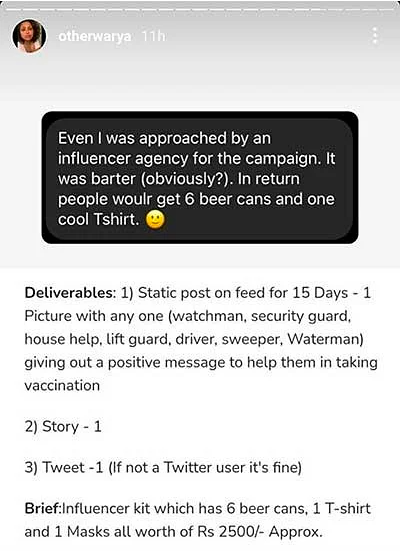 While the sentiment behind the campaign might seem innocuous and philanthropic, netizens felt that the campaign depended on using support staff ‘as props without their explicit consent’. They also felt like the brand rewarded only influencers with beer cans and tee-shirts, without the domestic helps receiving any gains for featuring in the post.
“Paying influencers to post pictures with domestic workers without ensuring that they are fairly compensated for content based entirely on them, just doesn’t sit right. They reached out to me to be a part of this. I declined and flagged this concern along with asking them to not refer to domestic workers as help. Which was the copy of the proposal sent out. There are better ways to promote your brand than off the backs of vulnerable groups of workers who are being treated as props. Equally applies to influencers,” tweeted Trisha Shetty, founder and activist of SheSays. 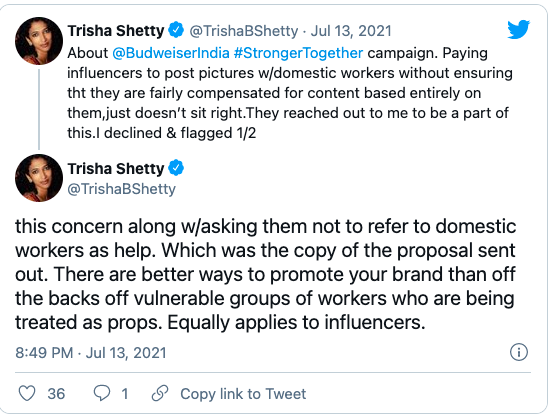 According to a media report, both Budweiser India and Voxxy Media, its recently appointed digital and influencer marketing agency, refused to comment on the matter.
Earlier in April this year, the brand was in hot water after painting Lionel Messi’s murals over existing iconic street art in Mumbai and Delhi. St+art India Foundation, the organisation which commissioned the original art, claimed that the earliest murals by artists Okuda San Miguel and Mariusz Waras went back as far as 2014