KV Sridhar and Raj Kamble discuss the role of technology, if any, in ideation, and whether technological innovation has any bearing on the nature of a creative piece. 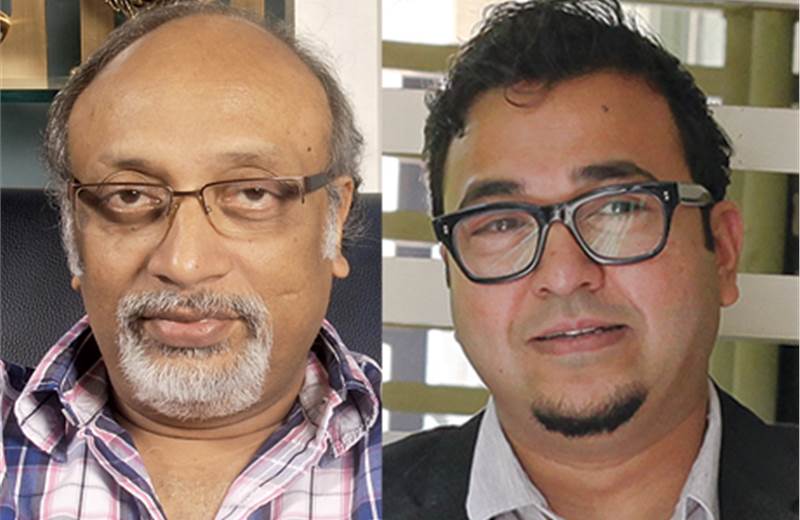 Is technology helping or harming creativity?
K V Sridhar (KS): Technology is a means and has nothing to do with ideas. Ideas are supreme. Ideas have become a little different from what they were, surely. Earlier we needed a big idea to make a creative. Now, we have an idea which can be used to create different experiences. But essentially, you need a central idea to build a brand.  Earlier we had a film and a passive audience but now responses are being sought. Now the creative agencies are putting the work on YouTube. The audience watching the content on YouTube is an active audience; this audience, as a reaction to the work, wants to do something or say something. That is where the change has happened. The narrative has changed, the way you tell the story has changed. Technology only helps to narrate a story to today’s audience across channels, given that today’s connected world behaves in a unique way.
Raj Kamble (RK):  Of course it’s helping creativity. Take a simple example of the 20cc print ad of our earlier days, which you could just see versus now when we have a banner in the same size – it allows you to interact, play with it, watch a video, hear sounds. Technology therefore allows the viewer a better sensorial experience. Technology is making the canvas much wider. From a basic banner to Google wallet, it is not just helping creativity, it is helping humanity.

Is technology adding to the creative output in advertising, or diluting creativity?
KS: Without technology creativity cannot flourish. Be it invention of a canvas, paint, moving pictures, sound or television, it is all because of technological advances. This allowed creative people to narrate their stories to a larger audience than to a set of people gathered around a campfire. In such ways, technology always helps in telling your story in a better way. Simplest example would be to observe the relationship between Hollywood and Silicon Valley in today’s time. Everything from animation to visuals to sound is taking the help of technology to tell a story.
RK: I believe it is adding to the creative output.

Is adland thinking 'digital first' rather than 'ideas first'?
KS: There is no classification as a ‘digital idea’ or an ‘analog idea’. Ideas are ideas. We never think that since we have to use the camera we will tell a story. The medium never dictates. A ‘digital first’ approach is all about the internet. And what essentially does the internet do? It connects several things at the same time allowing you to switch between or navigate through them. The decision is in how to use platforms to spread the message aiming for it to reach the intended audience. We may have become more imaginative with 3D graphics and CGI etc. coming in but the essence of arriving at an idea remains the same.

RK: Ideally we should be thinking 'ideas first.' I always say that digital is just the platform, and idea is the train. People should not mix the two.
In the case of digital-led campaigns, are ideas stemming from availability of technology, rather than the end-user experience?
KS: What technology does allow you is the ability to play around with the formats. You can’t have a technology first and the try to arrive at an idea. Each time we make a call, we are not thinking about the technology that allows us to make that call, rather we focus on delivering the message. To take a more recent example, people are enjoying the movie Baahubali – nobody is interested in the filters used, the layers made, the cameras used. They are interested in the final output on the screen and whether that is engaging.
RK: There’s nothing wrong with ideas stemming from the availability of technology, as long as the idea is an idea and not a gimmick. If the idea itself does not have potential, it will die anyway. Take for example, QR Codes. For the last three years, The Times of India is trying to get people to use their Alive app. Show me one guy who checks that.
Does ideation with potential of technology in focus work better?
KS: Nothing of that sort. Graphics or 3D cannot work if the core idea does not. The story of a brand should interest people, if people like you they will welcome you in their lives. If not, no technology can salvage that.
RK: Ideation works best when the idea comes first, and you then choose technology that does justice to the idea. In today’s world, 90 per cent money is spent on media buying so choosing the right media or technology accor­ding to your idea is very important, but not vice versa.
Are ‘traditional’ creatives now channel-agnostic with advent of digital, or does the film still rule ideation?
KS: A lot of agencies died in the early 90s because they could not adapt to television. They were very good print agencies but they lost out when television came in. The agencies that adapted to television are now bigger agencies. In the same way, creatives or agencies which adapt to change will always be a bit ahead of those who don’t. The same applies to brands. The ones who have refused to change with the times have fallen behind. On the other hand, you have these call-a-cab companies growing well.
The point is you need to grow and adapt to change. A lot of people who are running agencies today were born way before the internet was conceived. It only goes to show they were ready to take technological advances in their stride and use it for communication.
Clients have started spending more money on other mediums. Creative agencies have become television suppliers, nothing else. Traditional big ideas are no longer useful in a situation where you have to articulate the same idea in ten different channels. The ‘big idea’ definition has changed.
Take for example, the #SelfieWithDaughter campaign which allows users to propagate their ideas, stories rather than a brand or an agency launching a film for the same. The time has come when people want to be involved in ideas and stories. Spending Rs 100 crore wouldn’t have had the same effect as running this selfie campaign did.
RK: Fortunately or unfortunately, television is still the lead medium during ideation, not just in India but even across the world.

Can you cite one example from India where idea and tech were used together, to create output greater than the sum of its parts?
KS: Honda ‘The Other Side’ is one example, although not from India. It gave the user the right to decide which movie s/he wants to watch.

RK: I don't know about any Indian example, but I really liked the recent Honda R interactive video.