Sandeep Goyal looks at the year gone by through the Amul hoardings. 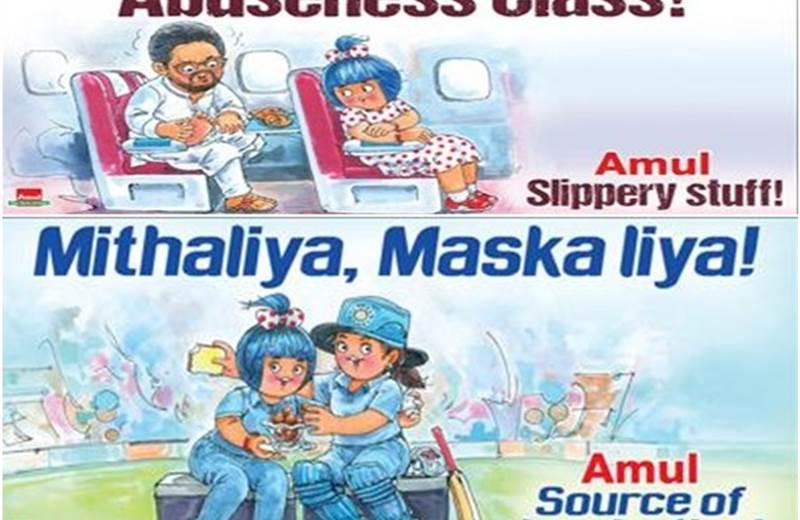 Sandeep Goyal believes Amul hoardings are the best mirror to the everyday India. Here are the best 50 of 2017 to track and revisit some of the most happening events of the year gone by.

US – India relations
1. Ivanka Trump visits India for the Global Entrepreneurship Summit hosted by India and the US. The visit is ridden with several controversies – beggars to women exploitation.

2. Modi meets Trump. It is a ra-ra meeting between the two leaders who are otherwise chalk and cheese. 3. US tightens H1B norms, gets Indian IT worried. Trump is doing to India what no American president has ever done before. 7. GST gets rolled out after a long wait, but many still call it hasty. Big businesses complain about a confusing tax structure and small businesses say they’re going bust.

8. ISRO launches new Made In India satellite that will be used by SAARC countries. Big stratospheric achievement for India.

9. Liquor sale gets banned through a Supreme Court ruling. All restaurants in a 500 metre radius from a national highway not to sell alcohol.

10. Assault raises its ugly head in an airplane. Shiv Sena MP loses his cool on an Air India flight and assaults staff, gets blacklisted by all airlines.

11. The Aadhaar card increases in importance. The  Government says it plans to make the identification card compulsory almost for anything, and everything…

12. Street-side romeos get rounded up by the UP police. UP CM Yogi Adityanath wants to make the streets safe for women.

13. UP elections reaffirm the supremacy of brand Modi. The BJP gets a landslide win in the state.

15. Royal engagement - American actress Meghan Markle gets engaged to Prince Harry. They’re to be married on 19 May next year.

16. Zaheer Khan gets married to Sagarika Ghatge. Unlike Virushka, these two let fans know about their plans and shared their joy thru much hype on social media.

May their souls rest in peace

17. Shashi Kapoor passes away. The Deewar and Kabhi-Kabhi actor was sick and in hospital for a long time.

18. Tom Alter passes away. The actor fought a long and tough fight against skin cancer. 21. Chuck Berry, the founding rock-n-roll guitarist who is best known for his song Johnny B. Goode, passes away.

22.  Vinod Khanna, India’s Mr. Darcy, who gave us great performances in films like Amar Akbar Anthony and Qurbani, passes away. 24. Om Puri, veteran actor who did  both mainstream cinema and art films, passes away. 25. The Delhi Smog gets Sri Lankan players sick. Virat Kohli declares the innings earlier than he would have liked. 27. Hockey is back in the limelight. Indian team wins the Asia Cup after ten years. Many get reminded of India’s national game. 31. Dhoni steps down as captain for T20 and ODIs, paves the way for Virat Kohli’s rise.

Women in the headlines

32. Manushi Chhillar wins Miss World – brings the crown home after 17 years! A dancer and a medical student, she’s really a beauty with brains. 34. PV Sindhu becomes the first Indian badminton player to win the BWF Korean Open Superseries. Saina Nehwal and PV Sindhu give us much to be proud of.

Brand stories that got people talking

36. Indigo staff man-handles a passenger and gets trolled on Twitter; DGCA takes action. 37. Netflix sacks Kevin Spacey due to sexual harassment allegations. Much like his character in House of Cards he loses the support of all. 38. Star wins IPL rights for over 2.5 billion dollars. Rs. 54.5 crore per match is not insane if you look at it logically.

39. Vishal Sikka exits Infosys. At the heart of it, it’s a clash of values with the humble bosses, not a question of performance.

40. Flipkart acquires eBay’s India business after raising $ 1.4 billion from eBay, Tencent and Microsoft. No privately held Indian venture has raised so much money before. 41.  Vodafone and Idea merge. The consolidation that pundits were predicting since 2012, finally happens. It’s good news for the industry but hopefully they don’t rationalize network and trouble consumers too much.

42. Tata Sons gets its first non-Parsi chairman in former TCS CEO N Chandrasekaran. He says the group needs to consolidate its businesses. 43. Newton with Rajkumar Rao in the lead, becomes India’s official entry to the Oscars. It doesn’t make the cut, but Rao gets showered with praise for his performance anyway.

44. Pee Cee’s trench-coat gown at the MET Gala gets a thumbs-up. Looks like this girl can do no wrong. Her show Quantico, her interviews with Jimmy Fallon on The Tonight Show, her Instagram photos and her dresses  - people just keep falling more in love with her.

45. Bahubali breaks all box office records. Also becomes one of top 10 things people reacted to on Facebook this year.

46. Abhay Deol slams fairness creams ads and actors who endorse them, rakes up a controversy on Twitter. 47. The Padmavati set gets torched. It’s as if the filmmakers are repaying some big karmic debt. There is no consensus on anything - whether or not the character was truly fictional and whether or not the film actually has any objectionable content. 48. The Oscar goof-up. La-La Land was announced best picture instead of Moonlight. PwC made a mistake and now the Academy has banned their accountants from carrying cell phones.

That’s a lot in flashback. The good and the not-so-good. A year full of happenings, happy and sad.
Amul’s renditions leave very little role for commentary or explanation. So I have avoided being wordy or verbose.
My thanks to Nikita Rana, my executive assistant, who helped put this piece together.
(Sandeep Goyal has been in love with the Amul hoardings ever since they started. He uses them as the best mirror to Indian society. Enjoy!)