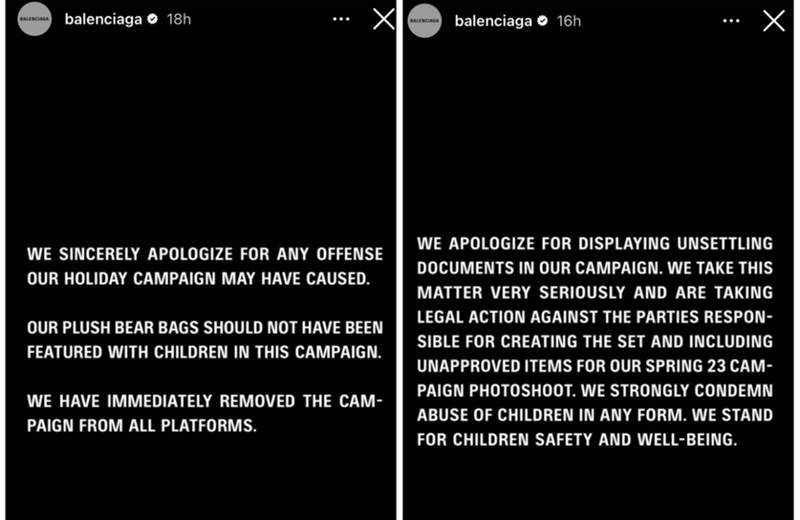 Balenciaga has apologised after facing criticism for its most recent campaign, which featured children holding teddy bears dressed in bondage gear.

The campaign, shot by photojournalist Gabriel Galimberti, was intended to advertise the brand’s holiday gifting objects, including teddy bears and champagne glasses.

Instead, it was heavily criticised on Twitter, and #cancelbalenciaga currently has 142,600 views on TikTok.

The French fashion brand issued a statement on its Instagram stories and said: “We sincerely apologise for any offense our holiday campaign may have caused.

“Our plush bear bags should not have been featured with children in this campaign.

"We have immediately removed the campaign from all platforms."

The court documents, from a 2008 Supreme Court ruling which upheld penalties for sexual exploitation and child abuse, were actually featured in Balenciaga's "Garde-Robe" Spring 2023 campaign, which debuted this week.

The Instagram statement went on to address the court documents featured in this campaign and added: “We apologise for displaying unsettling documents in our campaign.

"We take this matter very seriously and are taking legal action against the parties responsible for creating the set and including unapproved items for our Spring ‘23 campaign photoshoot. We strongly condemn abuse of children in any form. We stand for children safety and wellbeing.”