Axe: circumvented the rational v emotional quandary (above) with a brand-building campaign that also boosted short-term sales (below)

A new IPA report, The Long And The Short Of It, examines the differences between the drivers of success over different time frames. Based on analysis of around a thousand effectiveness case studies, it reveals how and why a focus on short-term results will inevitably mean underperforming over the longer term.

Time is an important issue for marketing. Quarterly reporting by brand owners has put ever-greater pressure on marketers to deliver acceptable results every quarter. Add to this the fashionable idea of "real-time marketing" advocated by the big-data community, and it is understandable that marketers might be persuaded to think short term.

Yet businesses and politicians increasingly recognise the pernicious effect of quarterly reporting on long-term value creation. So a general tension exists between success in the short term and in the long term, and it is simplistic to imagine that repeated short-term success inevitably leads to long-term success. The concern that this applies equally to marketing is at the heart of the new IPA report.

Although it is often said that there are no long-term results without short-term ones, the reverse is not true; it is perfectly possible to generate impressive short-term sales effects that fail to deliver year-on-year growth.

The report explores many facets of this tension, but the one that shapes campaigns most profoundly is the communications model. The analysis shows that the kind of advertising that delivers the best short-term results is rational: ie. it communicates facts to persuade us to buy. Over periods of less than six months, such advertising tends to outperform emotional campaigns across many business metrics.

The chief downside to rational advertising is that its message is inherently unmemorable, so its effects decay very quickly and only expensive and increasingly inefficient repetition can keep sales flowing. Nevertheless, over the short term, it can be a highly efficient sales driver. 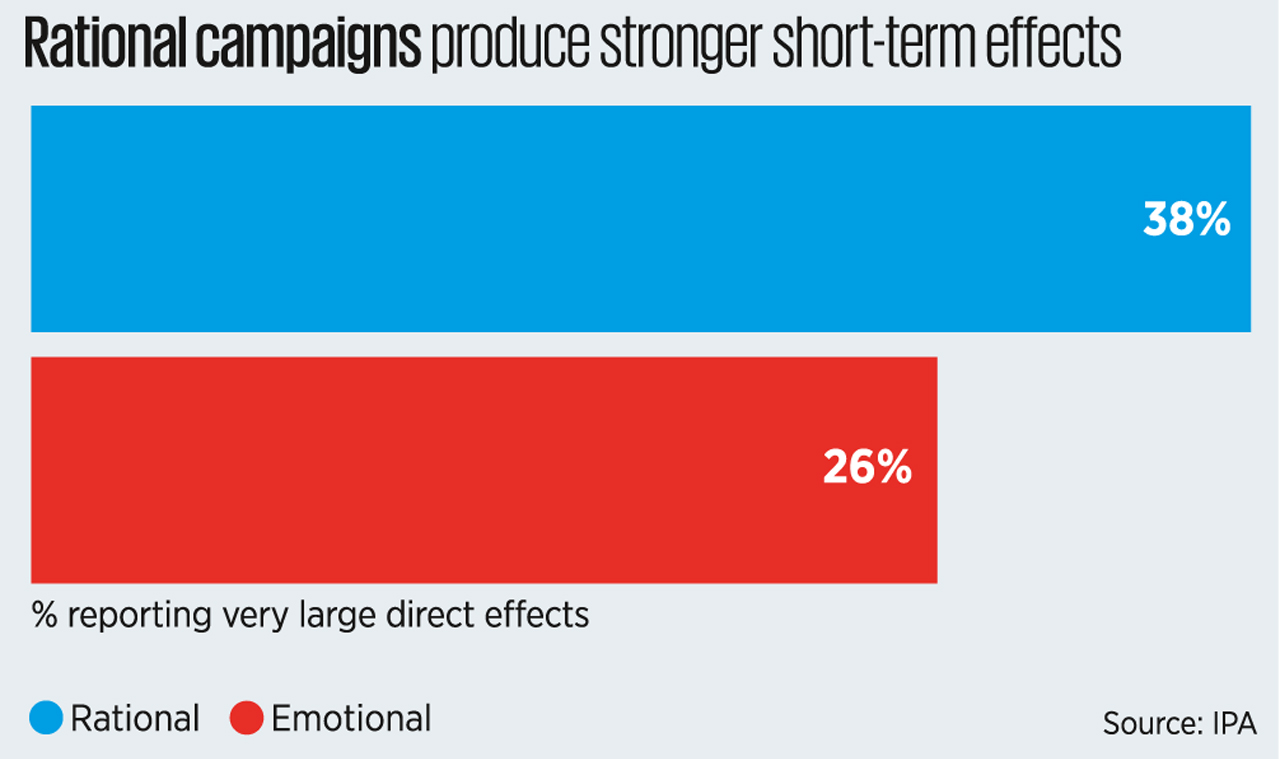 Emotional campaigns (those designed to change the way we feel about brands) tend to generate less impressive immediate sales responses, but their efficiency grows strongly over time. By around six months, the cumulative build of successive exposures means emotional campaigns start to power ahead of others. The impact on profitability is most pronounced. 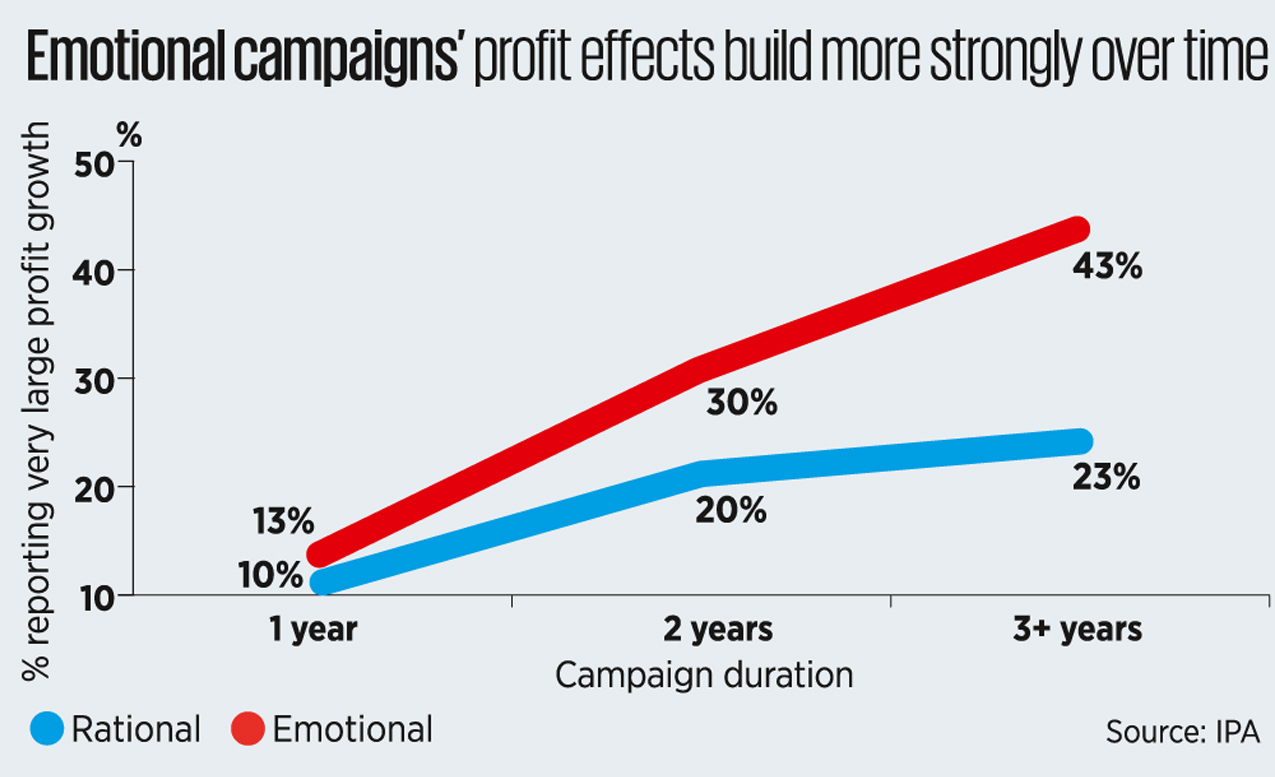 So brand owners that measure success over the short term, including over the three-monthly reporting cycle, will inevitably be drawn to rational communications models. But the cost of this will be that they will miss out on the much greater long-term profit potential of emotional models. It is easy to spot entire categories that have ended up behaving like this – with no brands in the category to demonstrate the advantage of long-term thinking, it becomes accepted "wisdom" that the category is a special case. The IPA data, however, provides no evidence of any exceptions.

The underlying reason behind the profit superiority of emotional campaigns is that they excel at reducing price sensitivity, allowing brands to defend or harden pricing over time. It appears to take at least six months before pricing impacts start to become evident but, after three years, they are still growing.

Measuring the price sensitivity of brands is key to resisting short-term pressures: short-term activity will fail to deliver improvements. Rational campaigns generate much weaker pricing benefits, even over the short term. The data shows that pricing effects almost never occur without brand-building effects: image, differentiation, fame and so on. The more of these that can be achieved, the stronger the pricing benefit.

Not surprisingly, the data also shows that emotional campaigns build brands much more strongly than rational ones.

Above all, short-term horizons are destructive of long-term value creation because of their impact on creativity. Creatively awarded campaigns form the pinnacle of long-term effectiveness, with ten times the sales efficiency of others. But they, too, underperform in terms of short-term sales effects compared with rational campaigns. So the luckless quarterly or real-time-driven marketer is actually denied all the major levers of long-term value creation for brand communications: emotions, fame and creativity.

The answer, as a growing number of IPA case studies prove, is to create powerful emotional platforms for brands and develop a busy integrated activation schedule to drive short-term sales. A good example of this is the Axe "fallen angels" campaign. A hugely seductive TV commercial refreshed the long-standing brand promise of success in the "mating game". But one of the great strengths of the brand is its sense of annual renewal, which inspires a rich stream of activation ideas – in this case involving angels, "real" and virtual (if not entirely virtuous).

Campaigns that follow this model, strengthening and exploiting brand equity, are significantly more likely to report major profit growth than those that focus exclusively on the long- or short-term roles. The IPA report provides guidance on the optimum budget balance between brand building and activation: typically around 60:40.

Hopefully, this report will help marketers balance short- and long-term success and be aware of the very real dangers of measuring success only in the short term and, especially, in real time.

The Long And The Short Of It, by Les Binet and Peter Field, is available from the IPA

The scent of a gamer: Lynx tie-in with Xbox debuts, ...