Dhoni sees more airtime on television than Kohli during the recent India-West Indies ODI series, even though he's not part of the team 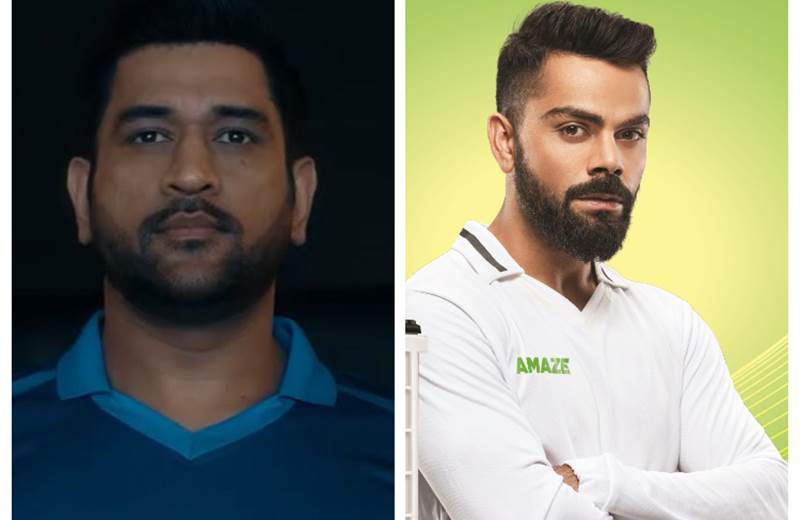 2022 hasn’t been the kindest for Virat Kohli as the former Indian captain followed a sub-par performance in South Africa with an even more ordinary one in the ODI series against the West Indies.
While Kohli has long been in the hunt for his 71st international century (the last one scored in November 2019 against Bangladesh), the last couple of months has seen a resurgence of another former Indian captain.
MS Dhoni’s back in the limelight with several advertising deals.
Six years ago experts stated that Kohli was the poster boy of Indian cricket and a brand favourite, while Dhoni's brand interest was fading.
Now, with recent commercials for Cars24, Turtlemint, Kinley, and Unacademy, it’s the old boy Dhoni who seems to be earning the endorsement dollars.
In the recently concluded India-West Indies series, MS Dhoni saw more screen time on television than Virat Kohli, even though the former wasn’t a part of the team. Kohli’s appearances on the pitch lasted a total of 50 minutes across the three ODIs. (6 minutes in the first ODI, 42 in the second and two in the third).
According to data from TAM Sports, Dhoni’s advertising presence was a total of 60 minutes across the three ODIs. TAM Sports’ data included minutes of advertising on DD Sports, Star Sports 1, Star Sports 1 HD, Star Sports 1 HD Hindi, Star Sports 1 Hindi, Star Sports 1 Kannada, Star Sports 1 Tamil and Star Sports 1 Telugu.
Much like his recent scores, Kohli’s advertising minutes have seen a drastic fall too, with the prolific batsman not featuring in any advertisements during the live game, although he did see some advertising air time during the studio programs.
With the T20 series kicking off later today, followed by the India-Sri Lanka series before the IPL, Kohli has the chance to let his bat do the talking and bring back the endorsement deals. If not, with cricket being a religion in the country, it seems like brands’ worship for the old-warhorse Dhoni shall continue in the build-up to the IPL.
(The author is managing editor, Campaign India.)