Open-source and mobile: The future of financial services in Asia

The opening panel at the Financial Services Marketing Forum set an entertaining and lively tone, reflecting an industry that is actively moving (and being pushed) beyond its long-held traditions in both business operations and marketing. 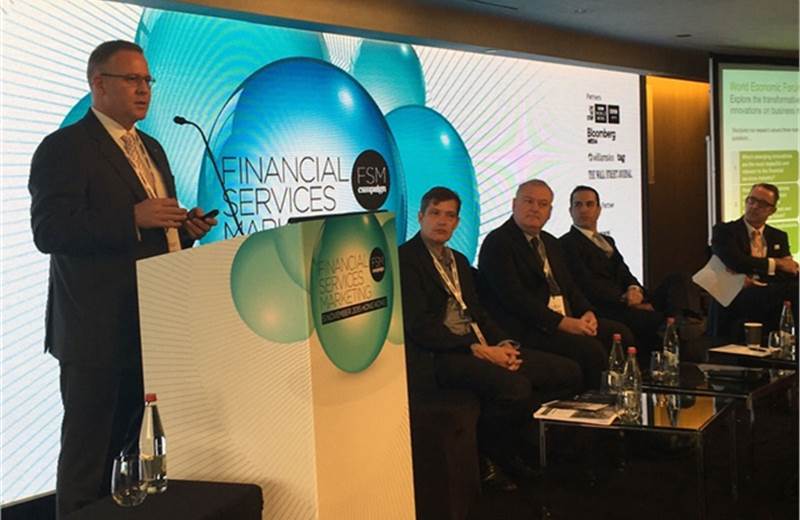 Moderated by David Tweed, reporter at Bloomberg News, the panel at the annual FSM forum started with a heart-sinking laundry list of the biggest job cut announcements by banks this year.
The cuts, according to Tim Pagett, Deloitte China's financial services industry leader, are a function of what’s happening to the industry and the restructuring that should have happened post-crisis. "There is no randomness associated with what’s happening at the moment," he said. "It is exacerbating the pace of change that is needed in the industry."
The future of finance
The panel spent considerable time discussing what financial services will look like in the future.
One definition that emerged: A network of platforms that connect current providers with other peers in a way that dislodges the closed approach that financial institutions have previously used. Essentially, financial services will become an open-source platform that accesses consumers and influences their preferences.
The traditional banking model will become unbundled, according to Pagett, as "lean and nimble" niche entrants develop credible financial solutions and exert margin pressure on banking products.
These entrants, such as fin-tech players, will create "digital banking marketplaces" that will disaggregate current customer relationships and enable comparison shopping as price competition intensifies, he predicted. "The banks' universal ownership of customer relationships will be challenged. Progressively, as customer information is held by these entrants, the power of banks will be divested."
The only remaining "power" banks currently have is "knowledge around default rates, but not around behaviour", he pointed out. Or at least that is the way in the West.
"The core of money in the US is based on credit scoring, but China's system is currently opt-in," said Aaron Boesky, chief executive officer of Marco Polo Pure Asset Management, who went on to give a master class in how troubling he felt the system is. "The scoring is insane in China—not just based on financial history, but political views and citizenship standing play a huge role.
"If you are involved in something that is anti-government, your credit score will be demoted, and even your friends' scores will be demoted. So what happens is your friends will pressure you to toe the political line. It is mind-boggling how politics play into financial services. If you want to be successful, you have to regurgitate the party dogma."
To that, a bemused Pagett phrased his perspective slightly differently. "Having a strong appreciation of the policy framework is very important, like understanding the five-year plan and what cascades from it," he said.
Oftentimes, if a foreign financial services provider operating in China "thinks something else is instead the right thing, you have to carry the cost of it for a while", he added.
To that point, the Chinese government is not completely inflexible when considering business models, pointed out Lachlan Colquhoun, chief executive of East & Partners Asia. "China is very willing to embrace Alibaba, Tencent and their disruptive services," he said, although the relationship with financial innovation was controversial and combative over the last 10 years. "But now the government is franchising them".
Have you got WeChat?
Boesky: "How do we get into the China market?
Pagett: "Have you got WeChat?"
This exchange underlined how actively engaged Chinese consumers (and even serious central bankers and accountants) are with the platform, and how pertinent it is for any financial-services provider that wants to enter the market to know the nuts and bolts of WeChat.
"If your audience hangs out there, why shouldn't we?" asked Peter Bakker, commercial director for Asia at King Content, in response to Bloomberg's Tweed, who felt it was "shockingly informal and undermining" to reach Chinese investors via a chatting app.
"It’s not about us thinking what is right," said Pagett, who disagreed. "WeChat is not an informal channel; it’s the fabric of how people communicate now".
The panel also spent time discussing insurance, a segment that is ripe for disruption, according to Pagett. This is particularly so in Asia, where it is distributed through a bancassurance and agency workforce model. The disrupters will be using wearables, telematics and biometrics to inform a policy-holder and to change the way insurance is being underwritten, he said.
Finally, the panel talked about mobile banking and how it will transform operations and marketing. Upgrades to smartphones will number about a billion this year, of which 600 million will have NFC capabilities that enable mobile-banking elements. That's how the "unbanked population" will be reached.
In fact, the whole regulatory banking framework may just become obsolete and irrelevant with the rise of mobile banking. Mobile banking gives real-time information about consumer behaviour that will naturally change the dynamic of marketing.
"It's no longer about getting the people that you have historically dealt with," said Bakker.
In the same vein, messaging will have to keep up. The new generation in Asia will only know banking as a task carried out on mobile devices, said Pagett. "They won't know how to write a cheque," he said. "That's equivalent to asking them 'What is a sex tape?' They will ask you back 'What is a tape?'"