Nava Malayali, at pace with the fast-changing Kerala

The Navamalayali creative depicts Kerala's transformation to the modern era, by the varied digital platforms of Manorama Online. 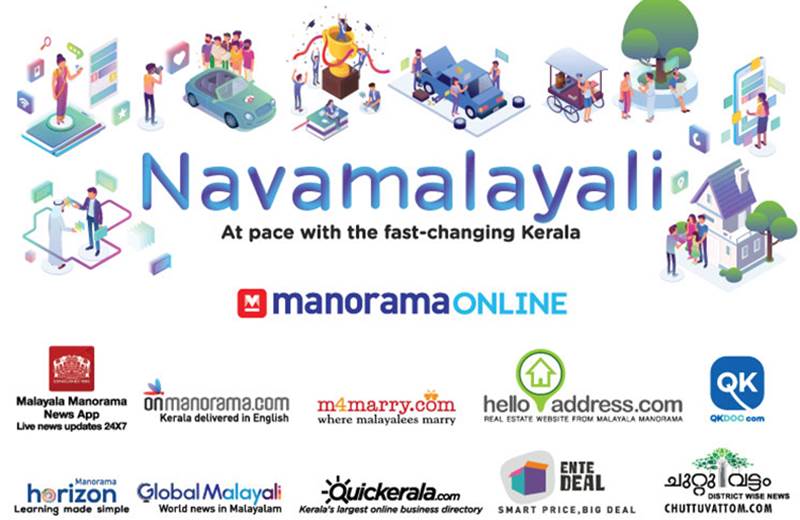 For long a definite leader in key human development indices, Kerala was well-equipped to ride the waves of technological revolution that swept the globe in the past two decades. The southern state that made headlines with its enviable achievements in literacy and health care also leads in the development metrics of the modern era – access to mobile phones and internet.

Kerala's internet penetration rate – 54 per cent according to an IAMAI report – is second only to the national capital, Delhi. More than 30 million mobile phone connections in a population of 33 million propel Kerala to the top slot in terms of mobile phone penetration, with a rapid increase in the use of smart phones.
Malayala Manorama, one of the oldest newspaper houses in Kerala, has spectacularly reinvented itself to march along the digital-native generation of the state. While the flagship daily and other publications from the group acted as a beacon in Kerala’s journey to the top of the human development indices, the state’s transformation to the modern era was guided by the digital platforms led by Manorama Online.
It was only natural for Malayala Manorama to pioneer technological innovations in Kerala. Manorama started the online news portal in Kerala as early as 1997. Nothing on the web captures Kerala like Manoramaonline.com. No other news portal draws from such a vast network that extends to the hinterlands of Kerala. Every Malayali has strong emotional bonds to this portal.
After Manoramaonline.com, Malayala Manorama added a slew of news portals like Chuttuvattom.com (Hyper local news platform), GlobalMalayali.in (World news in Malayalam), Onmanorama.com (English news portal) and utility apps and portals like ManoramaHorizon.com (Education portal), M4marry.com (Matrimonial Portal for Malayalis), Helloaddress.com (Kerala's own real estate portal), Quickerala.com (Local search engine with the largest database of business/services in Kerala), Qkdoc.com (Hospital/Doctor appointment), Entedeal.com (Big deals at smart price). These were Manorama’s constant technological innovations which democratize the use of technology in its respective areas and Keralites adapted to it very easily.
Technological transformation was a smooth affair for a society that revelled in near-total literacy and high education standards. Manorama’s ‘Nava Malayali’ campaign is a tribute to every Malayali for their agility that helped adapt to innovations. The tagline ‘Nava Malayali, at pace with fast-changing Kerala’ clearly reflects this. We are really thankful to every Malayali for giving us the opportunity to be the reason for this reforming changes in Kerala over 23 years.
The campaign won two awards at a recent awards night. It bagged a gold medal in the Best Integrated Campaign category and a bronze medal in the category of Online Campaign. The campaign was carried out extensively via print, digital and outdoor mediums.