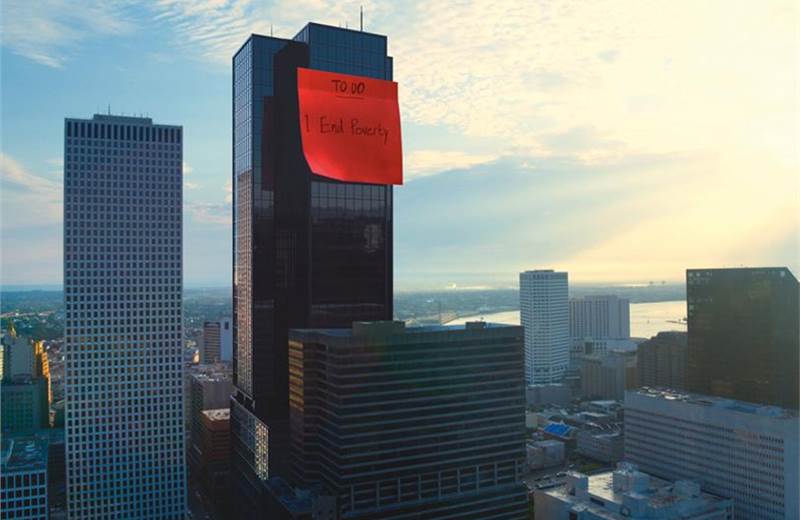 Karmarama and not-for-profit Project Everyone have recruited brands including Google, Unilever, Mars and Diageo for a campaign to spark action around the UN's Global Goals for sustainable development.

The Accenture Interactive-owned agency has created "The world's to-do list", which reimagines the UN sustainability goals as a short, actionable to-do list. Accordingly, the 17 tasks are displayed on giant sticky notes, and include "End poverty", "End world hunger", "Achieve gender equality" and "Tackle the climate crisis".

In the ad created by Rachel Holding and Dan Leppanen, the giant sticky notes carry the goals hand-written on them and can be seen in locations worldwide from New York to Venice.

Meanwhile, a campaign film directed by Ludo Fealy through Nineteen Twenty will be played at the Global Citizen Festival, a 24-hour live-streamed festival across six continents.

The sticky notes will also appear worldwide on static and animated billboards, Instagram, Twitter and brand website takeovers. Other activations include projections on buildings in the UK and DPD van takeovers.

In India, giant sticky notes will appear as a large-scale art project across the country, with the Rouble Nagi Art Foundation painting murals across villages in five states while working with local communities to educate and support the issues raised by the goals.

Brands and businesses backing the campaign have been dubbed "The Global Goals business avengers" and comprise Arm, Avanti, Commvault, Diageo, DPD, Google, Mars, NTT, Reckitt, Salesforce, SAP, Unilever and Wood. Each is sacrificing physical and digital space. Their corporations' buildings, social media channels and websites will be given over to the 17 Global Goal sticky notes. This will include sharing the actions they are taking that are contributing to the achievement of particular goals, while also stating what is on their "To-do list" for the near future.

Ben Bilboul, chief executive of Karmarama and managing director of Accenture Interactive, said: "Time is running out. If we're going to hit the UN's Goals by 2030 we need to shift from talking to doing. And enlist business to help us get there. The world's to-do list is a simple idea that everyone can get behind, and harnesses the power of business to help save the planet."

The campaign has been launched to coincide with Global Goals Week, an annual event to mark the anniversary of the Global Goals during the UN General Assembly, which takes place from 20-26 September and culminates in the Global Citizen Festival. There will be further activity during the COP26 global climate conference in November.