Battle of the Brands: Too Yumm! vs RiteBite

In this next Battle of the Brands article, find out how fast-growing snack brands Too Yumm! and RiteBite are setting themselves apart in the pantry.

The first pair of brands we analyse in the Food edition of Talkwalker’s Battle of the Brands are snack brands Too Yumm! and RiteBite, which are both positioned in the healthier snack category. Which themes are trending in conversations around the two brands? And what steps have they taken to get consumer-close over time?
Talkwalker is the leading consumer intelligence acceleration platform, helping over 2,500 brands drive business impact with actionable consumer insights. The Battle of the Brands series utilises Talkwalker’s AI-enabled Blue Silk technology to demonstrate how to conduct a competitor analysis across millions of images, videos, audio, conversations, and tags from across social media, blogs, news channels, and more. Providing a bird’s eye view of mentions, engagement, and sentiment surrounding some of the biggest brands in India today.
Mentions and engagements
When it comes to mentions and engagements, Too Yumm! takes the majority in comparison with RiteBite, with much of the brand’s attention being boosted by the ambassadorship of cricket star Virat Kohli. In contrast, a significant number of mentions and engagements were earned by RiteBite through its #GoGuiltFreeThisDiwali campaign, which ran throughout October 2021, and included a good-old Diwali giveaway.

Mentions and engagements on snack brands Too Yumm! (pink) and RiteBite (purple), covering the past 13 months, from February 2021 to March 2022.
Top themes: RiteBite
Conversation themes reveal where the two brands continue to diverge in terms of their approach to consumer engagement. RiteBite’s strategy highlights a much more nutrition-focused, and ingredient-focused approach to its marketing. The brand caters to a gym-going, health-conscious crowd – as shown with keywords such as ‘workouts, ‘diet’, ‘energy’ and ‘strength’ which surface in Talkwalker’s theme cloud analysis. 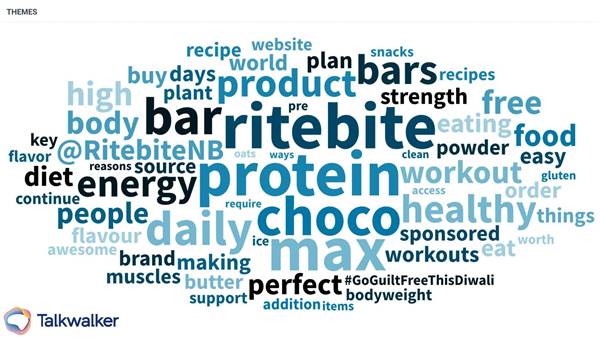 A closer look into certain properties of the RiteBite’s snack bars reveals that they are regarded as a source of energy and protein by the brand’s nutrition-focused consumers.
Upon further analysis, we also see that associations of RiteBite snacks as a protein-rich, and energy-rich supplement continue to endure over time, in online conversations surrounding the brand. These associations are encouraged by the brand’s giveaway campaigns which are focused on consumer education. Its Diwali Special Treasure Hunt, for example, got its Twitter audience to match the correct ingredients to the associated RiteBite nutrition bar.

A closer look into certain properties of the RiteBite’s snack bars reveals that they are regarded as a source of energy and protein by the brand’s nutrition-focused consumers.
Top themes: Too Yumm!
Conversations around Too Yumm!, on the other hand, appear more focused on its celebrity endorsement, flavors, and snackable quality. Its appeal to a younger, college-going consumer is driven home by social media references to college survival kits and popular culture (read: Wordle). A bulk of the top themes also resonate with Virat Kohli’s endorsement tweet which garnered over 42K likes and more than 2.3K retweets. 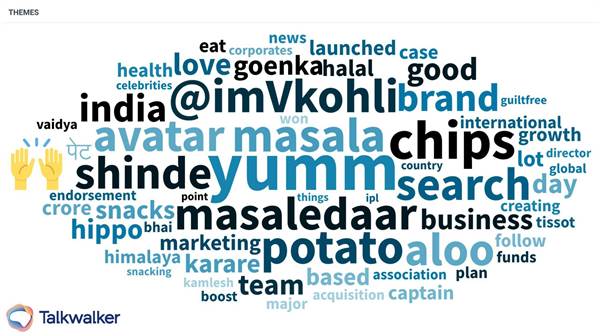 Talkwalker’s theme cloud shows the top 25 keywords surrounding conversations around the Too Yumm! brand, where font size corresponds to the number of mentions.

Amongst its range of products, Too Yum!’s chips appear to be the most well-received, based on the number of mentions over the past 30 days, according to Talkwalker analysis.
What are some other food brands that are top-of-mind for consumers today? And which brands are leveraging consumer intelligence to drive innovation within food categories? Stay tuned into the Food edition of our Battle of the Brands series for your weekly analysis and, in case you missed it, catch up on last week’s article covering emerging themes in the food industry.