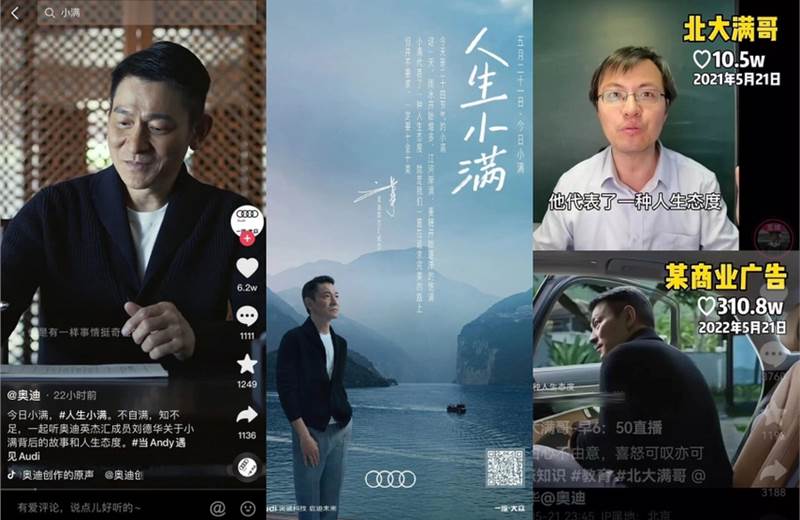 FAW Audi, the automotive brand jointly owned in China by Volkswagen Group and FAW Group, is being slammed by netizens on Chinese social media for an ad that allegedly plagiarises content from a Chinese influencer on Douyin. The ad, which features Hong Kong star Andy Lau, has already gained some five million likes on Lau’s Douyin account since its release on the morning of May 21. The video was released in conjunction with Xiaoman, a significant day to indicate the start of a new solar term in the lunar calendar.

The influencer, who goes by the name Beidamange, accused Audi of using word-for-word lines from an original poem he penned and recited on his account to usher in Xiaoman in 2021. Upon release of the ad, he released a video to express his concern: “The poem was made by myself. Please ask the original author when citing [it].” Beidamange, who has gained 1.2 million followers on Douyin since the debacle, added that the brand failed to communicate with him before using his content.

See the Audi ad below, as well as the two pieces of content side-by-side:

Since the backlash on Chinese social media, Audi has taken down the ad and released a statement [translated to English below):

We sincerely apologise for the distress caused to Mr. Andy Lau, Beidamange, and related parties in the incident due to inadequate supervision and lack of reviewing. The video was presented and executed by the creative agency M&C Saatchi. [We are] not avoiding the issue, [but] we have instructed M&C Saatchi to deal with the copyright infringement as soon as possible and to [provide] a satisfactory answer to the public. All the videos will be removed from official Audi channels until all facts are clarified.

A screenshot on Weibo shows that the controversy is a trending topic.

M&C Saatchi, the independent London-based agency network responsible for the video, also released a statement (translated to English below). Many of M&C Saatchi's offices across Asia-Pacific are minority owned by local operators who typically run their agencies with less global oversight than larger ad holding companies. Incidentally, M&C Saatchi is in the midst of a takeover proposal by Next15 for US$387 million in a surprise bid accepted just three days ago.

Our Audi service team is the Audi Xiaoman brand video development team. In the process of developing the video content, due to the team's weak awareness of copyright, they directly used the text content of the video about Xiaoman by Douyin blogger Beidamange without communicating with the copyright holder, which brought great inconvenience and distress to Mr. Andy Lau, Beidamange and the FAW Audi brand. We sincerely apologise to the original writer and promise to do our best to make up for the damage caused to the original author. The company promises to respect and protect the rights and interests of the original creators in the production of advertisements and to strictly prevent this from happening.

To make matters worse, netizens are dragging Publicis Groupe through the mud for falsely assuming that M&C Saatchi is a subsidiary of the group. Publicis released a statement to clarify the matter:

Lau too issued a similar statement citing his apology as well as respect for the original content.

According to Zhang Hongbo, director-general of the China Written Works Copyright Society, who was quoted in Chinese state media Global Times, the copyright of brand films belongs to the advertiser, which in this case is Audi. Thus, Audi should bear the legal responsibility for infringement, including issuing a public apology and financial compensation for the influencer.

However, for ads produced by agency partners that are commissioned by an advertiser, Zhang added that Audi can also pursue the responsibility of the advertising company and recover losses from it according to the contract.