iBall has announced the launched of its 35 Lumens iBall Andi projector phone with an ad film created by Palasa Creative Place.The TVC went on air on 2 September and will be supported by print, radio, outdoor and digital.

The film features video projection at different places from the phone, like the top of a train, a wall, a bus and even on people. Scenes featured include a powerpoint presentation projected on a white shirt, a lady projecting a cooking show onto her kitchen wall, and a group of people projecting a cricket match on a vehicle on the road. Set to a peppy jingle that plays on 'Bioscope', the text clarifies that all the projections shown are actually from the phone being promoted. The film ends with Kareena Kapoor signing off, “Showtime in business and entertainment: iBall Andi projector phone”.

Sandeep Parasrampuria, director, iBall, said, “We are introducing the best ever projector phone in the world. This is really exciting for us and we hope the user will be as excited with the performance and specs as we all are at iBall.”

Sandeep Bomble, director and founder, Palasa Creative Place, said, "It is a multi-usage phone and can be used by anyone. Keeping this in mind we have created a very light-hearted commercial that connects to the pulse of the common man." 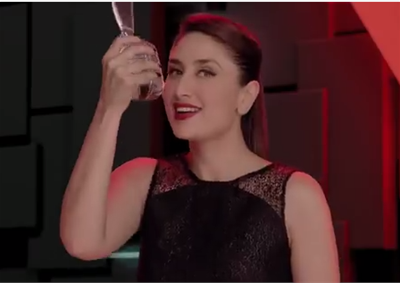 iBall tablets to make you 'Enjoy the Ride'