This campaign is a much-needed wake-up call, and one that could get you fired up for the week ahead.
At the heart of this campaign in Germany against racism is a book titled 'Mein Kampf - Against Racism'. It was born of the need to counter a piece of work that could harm the social fabric of the nation.
In early 2016, copyright protection of Adolf Hitler's inflammatory publication 'Mein Kampf' (My struggle) expired, and it could be re-published, stoking racist and extreme right-wing sentiments.
Ogilvy & Mather Berlin, on behalf of Gesicht Zeigen!, a non-profit  association encouraging people to stand against racism, came up with the idea of countering that with the new book.
It features 11 individuals who have struggled against racism and come out victorious. It includes concentration camp survivor Mosche Dagan, former Afghan child refugee and current MTV host Wana Limar, and an old lady who removes Nazi graffiti.
The first print of 11,000 books has nearly sold out in Germany and on Amazon, claims an official statement. A part of the proceeds go towards fighting racism. An English version of the book is in the works.
Tim Stuebane, project leader and ECD, Ogilvy Berlin, said, “Our aim was to reclaim the words ‘Mein Kampf’ from Hitler and to encourage everyone in Germany to stand up against increasing racism in daily life. All through the weapons of a communication agency: creativity, vigour and plenty of passion – resulting in the book publication, a strong PR-campaign, social media and attention grabbing posters, and  readings at the Nazi documentation centre in Berlin.”
Credits
Client: Gesicht Zeigen!
Agency: Ogilvy & Mather Berlin
Project leader and ECD: Tim Stuebane,
Team: Tim Stuebane, Birgit van den Valentyn, Stephen Kimpel and their team." 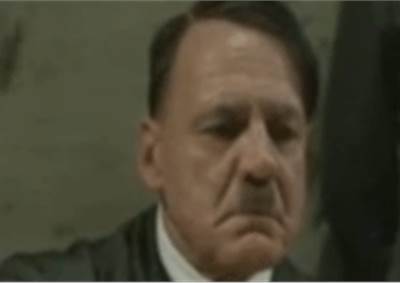 MMGB: Hitler and his burger