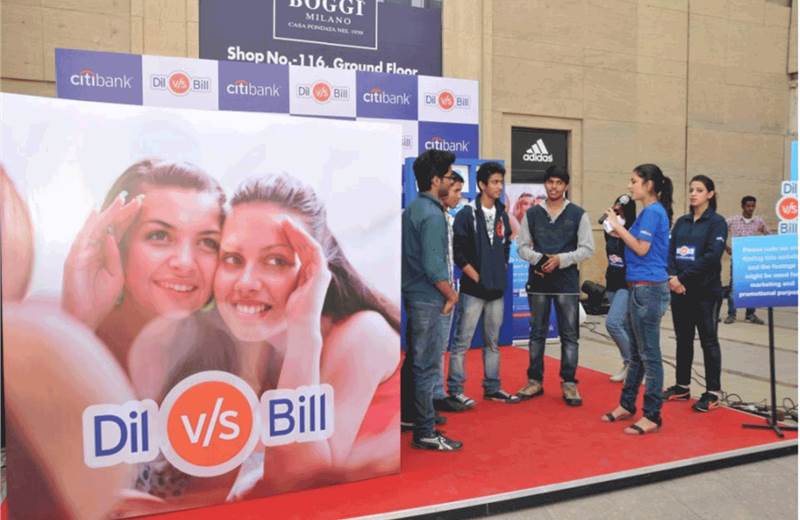 Citibank used an advertising format called skyvertising, in conjunction with social media, to promote its 'Dil vs Bill' no-extra-cost EMI campaign during the festive season in Delhi and Mumbai. The campaign was aimed at promoting the bank's EMI offering on credit cards. Publicis Ambience is the creative agency behind the campaign, while MEC India is the media agency.

On the initiative, Sanjeev Kapur, chief marketing officer, Citibank India, said, "Citibank offered EMIs at no extra cost at over 500 merchant outlets, allowing our customers to make big-ticket purchases during the festive season. We adopted new-age mediums like clouds, tweets and Facebook to create excitement amongst the upwardly mobile and socially networked consumers.”

Called 'Tweet a Cloud, Dil Se', the digital-led activation used differently shaped clouds made of helium which were released into the sky. Clouds of the rupee symbol, shopping bags, the Citi logo and 'EMI' were released above DLF Promenade, Delhi and at Phoenix Mills, Mumbai. Mall goers were urged to tweet with the hashtag #dilvsbill, for more clouds.

"The campaign was well received making #dilvsbill amongst the top trending on Twitter for over 53 hours continuously during the period of the initiative. Also, the 'Dil vs Bill' campaign post on Citibank India’s Facebook page reached out to more than 4.1 million users," added Kapur.
A statement from the creative agency pointed out that the campaign idea highlighted the conflict between the desire to indulge and expenses of the season.

Elaborating on the thought, Sunanda Chadha, vice president, Publicis Ambience, said, "As a bank and a facilitator of purchase, Citibank is perched at slightly higher level in the food chain of purchase. We needed to exemplify this, above and beyond the extremely cluttered festive landscape of hoarse cries of star bursts and discounts. 'Dil vs Bill' is a unique colloquial property that leveraged the insight of purchase decisions being a constant struggle between what we want and what we can afford. The campaign urged people to buy what their hearts wanted, thanks to Easy EMIs from Citi’."

Commenting on the activity, T Gangadhar, managing director, MEC India, added, "We are very proud of this integrated innovation. Not only did this bring to life to consumers' tweets outside Twitter, it also served as an interesting way to measure shopping sentiment leading up to Diwali."
The statement further informed that the campaign was strengthened with chasers, an innovative media strategy used in print format and radio spots. It pointed out that advertisements were placed in close proximity to lifestyle product ads giving consumers a reason to use the EMI offers on Citibank cards. Following this campaign, the statement noted that EMI sales on Citibank India credit cards for the festive season this year more than doubled from last year.