A 'Gold Spot' for your memories

More than 30 years after the original campaign, Potli Baba Mediahouse recreates 'The Zing Thing' for the 2020s

On a morning in 1986, the composer Louis Banks was called to make a jingle for the cold drink, Gold Spot. His instructions were simple: make it lively, happy and memorable. Mr. Banks got the brief. More than 30 years later, the production company Potli Baba Mediahouse has made a spec film for the drink, and the jingle has stayed the same.

“That's a composer's reward, more than the money you make on it, that people remember your song,” he tells me.

For the director of the film, Junssan, this has long been a dream project. “Gold Spot was my favourite drink as a child,” he says, “and it’s attached to all these memories and nostalgia.” The lockdown, with its stifling inactivity and tragedy, compelled him to get right to it. “After all this bog, you just want to dance, right?”

‘The Zing Thing’ sets the tune. The Gold Spot ads are full of dancing; some in a waltz, one on rollerskates, one in a park and another in a pool. “We used the rock-and-roll lifestyle of young people for a visual interpretation of the line,” says Kamlesh Pandey, the creative director of the ads.

Junssan’s film is no different. But added to the mix is a 21st century sensibility and animation, with designs by German artist Carolin Löbbert. Blocks of red, blue and pink beat with a vibrant slightly-psychedelic energy, alongside Mario characters and the ‘Bitch Please’ meme. The inspiration comes from everything 80s: graphic design, city pop and synth pop album covers, and MTV.

The nostalgic drive that grips Junssan isn’t atypical. Fans of the drink, bought by Coca Cola in 1993 and promptly discontinued, are in all corners of the internet. Photos of bottle crown collections, some with characters from Jungle Book on the underside, drawings and yesteryear magazine ads abound on Instagram. The uploaded ‘The Zing Thing’ ads have clocked more than a million views on YouTube. Junssan is among the many that remember their school trip to the Andheri factory fondly, likely their first time witnessing a soda in the making. Many played games named after it, any connection to the drink be damned.

The distinct flavour of the drink could have something to do with it. Junssan says, “I remember it being very different from the orange sodas that you get now. Just like Thums up is clearly different from Pepsi and Coke.” But the story is larger than that. “Gold Spot was one of the first Indian soft drink brands. Their imagery was so good,” explains Kamlesh Pandey, “that instead of fighting them out through advertising strategy and marketing, Coca Cola chose to buy them out with the sheer strength of money."

Despite its short run, the drink had more than a few ad hits. In the early 1970s, they featured a coquettish Rekha, then a South Indian actress at the cusp of her entry in Hindi cinema. “When (Kersey) Kartak looked at the rushes, he went, ‘Wow, I’m going to write a line for this,’” recalls Prahlad Kakkar, on the birth of the tagline “Livva little hot, Sippa Gold Spot."

The ad was one of the first shoots a young Kakkar attended, as an assistant on the set of the ad agency MCM. It was directed by Shyam Benegal and shot by Govind Nihalani, who would go on to make films for India’s ‘parallel cinema’ movement together. Usha Uthup sang, as Rekha sauntered down the beach with a bottle of Gold Spot. 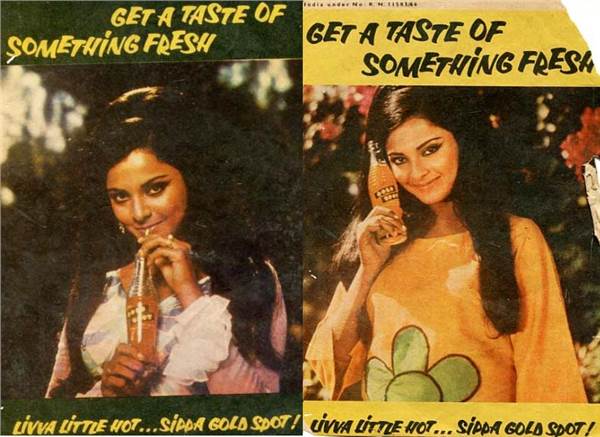 Television was still in its infancy in India, so it was the posters that did most of the talking. The ad was blown onto walls and boards under blinking lights and splattered across newspapers and magazines. Even Osho took notice of the ad, disparagingly saying, “If you read it too many times - ‘Livva little hot, Sippa Gold Spot’ - one day you will sippa Gold Spot!” in response to a question about a misbehaving memory.

The next set of ads were made by the agency ASP, after the FDA flagged a flavouring ingredient in the drink as possibly carcinogenic. Beyond making the chemical changes, the brand thought it best to deflect any complaints about the taste by positioning it as the ‘new’ Gold Spot.

Kakkar and the team decided on several scenarios - graduation, a wedding night - to gatecrash the climactic moment with, “Have you tasted the new Gold Spot?” But, towards the end of filming, Kakkar felt a tedium at the repetitive ploy. Covertly, he asked an office worker, a “vague funny-looking fellow,” to hide under a table. As the cameras rolled, he walked up to the counter and asked, “Can I have a Limca?”

“Shut up stupid, this is a Gold Spot film,” came the quickfire response.

It wasn’t easy to convince Ramesh Chauhan, the owner of the Parle drinks, Kakkar tells me. Despite Limca being another of his drinks, conventional advertising norms still held a firm grip. A senior, K Kurien, managed to convince him, and when it did air, “There was no such thing as viral then, but everybody was talking about it.”

When the time for ‘The Zing Thing’ ads came around, Gold Spot had been feeling the brunt of being perceived as the kid-favourite. The ads by Rediffusion were transformative. ‘Zing’ entered slang, a moniker for ‘sexy.’ It became fashionable to drink it, an identifier for disco-goers and dancers. “It worked like a bomb, for its time,” says Kakkar.

Much to Osho’s probable chagrin, ‘The Zing Thing’ has persevered in the memory of millions. And if it ever wants to make a comeback, it's got an ad waiting.