Some media channels needs to lose sales in order for Netflix and Disney+ to win them, and the most likely source is linear TV 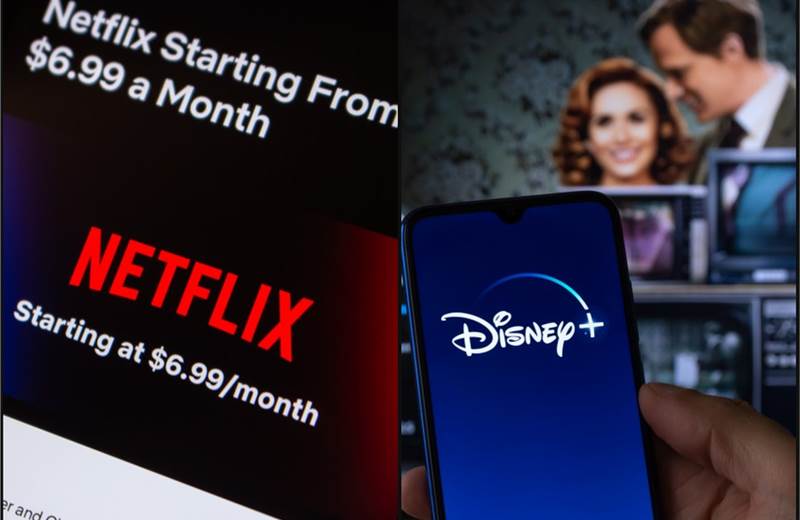 With streaming giant Netflix about to launch its Basic with Ads plan later this week, and Disney+ bringing in its own ad-supported tier in December, the TV ad world looks set for a shake-up.

Streaming wars between the likes of Netflix and Disney+ in competition for viewers and subscribers has existed for years. But now a new battle looms around ad sales. Some forms of ad-supported visual entertainment needs to lose sales in order for Netflix and Disney+ to win them, and the most likely source is traditional TV.

There's no doubt that linear TV is in secular decline. COVID accelerated the migration to on-demand and streaming, and around the world audiences are forgoing traditional TV subscriptions in favour of a la carte streaming subscriptions.

According to data from the Future of TV report 2022, in Southeast Asia, more than one in five (22%) OTT viewers no longer watch traditional TV. This is a 29% year-on-year increase that is attributed to more consumers working from home and bingeing on content at their convenience throughout the pandemic. And with more viewers ditching traditional TV for streaming and on-demand, ad budgets could also be making the switch.

"Advertisers have wanted to accelerate the move from linear but have also been waiting for enough scaled premium inventory," says analytics firm Samba TV's CEO and co-founder Ashwin Navin. "Netflix and Disney+’s moves will be the catalyst accelerating the shift of dollars into Connected TV (CTV)."

Netflix and Disney+, with 220 million and 152 million subscribers respectively, offer a sizeable reach, and as they enter the advertising ring they are likely to catch the attention of brands interested in reaching television audiences.

The launch of ad-supported tiers by Netflix and Disney+ is also likely to be exciting for brands that want to reach consumers through better quality content. In which case, not only could they draw ad budgets away from linear TV, but also from user-generated content platforms like YouTube and other social.

"Brands will spend first on premium content platforms instead of the user-generated content platforms of YouTube and social," says Mitch Waters, senior vice president for Southeast Asia, India, Australia and New Zealand at The Trade Desk. "With more ad-supported services, we’ll see a shift over the next five years."

Navin of Samba TV believes this will be a transformative moment for marketers and content owners alike to embrace.

"The move by Netflix and Disney+ embracing an advertising model will usher in the single largest influx of premier TV advertising inventory we have seen in a generation," says Ashwin. "Marketer demand will be very high as they finally have the opportunity to both present their brands with beloved franchises like Star Wars, Marvel, Bridgerton, and Stranger Things, but will also be able to do it on the biggest screen in the home."

In its letter to shareholders, Netflix have said that they want to build "a better-than-linear-TV advertisement model", but only time will tell whether or not they can achieve this without tarnishing the brand's premium image. After all, they were originally the pioneers of ad-free video entertainment.

"Premium offerings like Netflix and Disney+, combined with targeting, real-time optimisation, and measurement will help bring about a new era for ad-supported streaming," says Navin. "This new era will highlight innovation in the ad experience for consumers and brands. As a result, the future ad model will more than make up for the revenue lost from downgrading an ad-free service to an ad-supported tier." 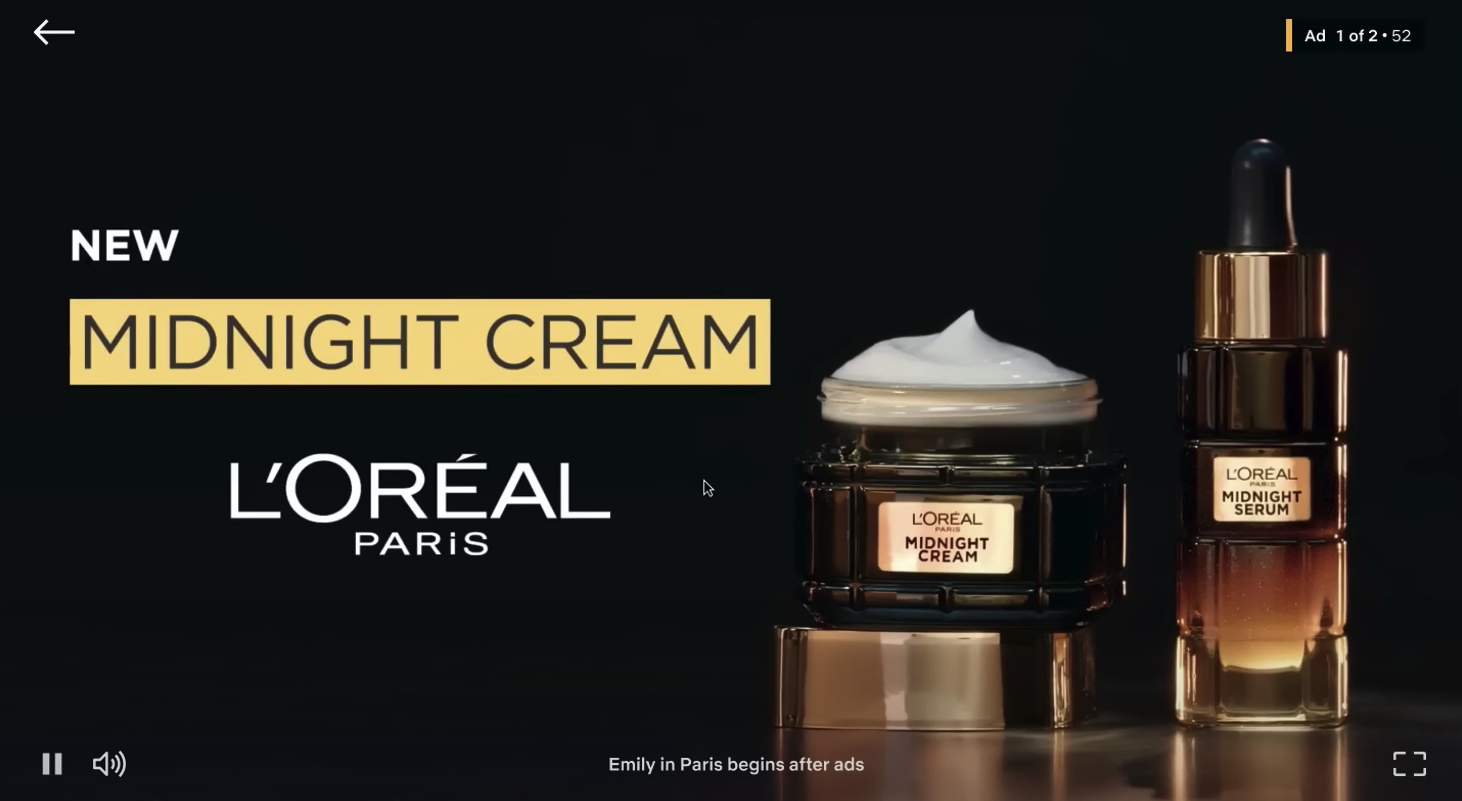 Netflix pre-roll ad example
Mitch Waters of The Trade Desk also feels that Netflix will benefit massively. "They can establish a clean ecosystem without channel conflict that also has the best ad experience for users—very light ad loads with relevant ads. They once again can be the pace car for the next leg of the race."

Indeed, Netflix’s offering is a bold move that threads the needle to give consumers a significant discount on the subscription while also keeping the ad load below 5 minutes per hour – which is the sweet spot for ad-tier adoption.

And starting in Q1 2023, Netflix have announced that they have partnerships with DoubleVerify and Integral Ad Science to verify the viewability and traffic validity of their ads.

"The recent announcements around their IAS and DV partnerships will bring greater insights and transparency, allowing advertisers to measure the platform's true effectiveness," says Louise Romeo, national head of operations and investment at Starcom Australia. "Although all eyes will be on the user numbers, we are particularly interested around how Netflix will evolve to keep pace with the market. Whether that be through improved targeting, more creative and dynamic ad formats, as well as how long it takes them to move towards being fully addressable."

A future for linear TV advertising?

While advertisers seem to be excited about the new ad-supported tiers from Netflix and Disney+, some are not convinced it will signal the decline in linear TV ad spend, but instead will co-exist.

“Linear TV will remain a choice for wider reach, but streaming platforms will provide advertisers with an opportunity to make more intimate connections,” says Suraja Kishore, CEO of BBDO India.

“There will be advertising objectives that will still find linear TV a more suitable medium, and I foresee content producers on the TV side rolling up their sleeves to compete with streaming platforms,” adds Kishore. “In a way it’s a going to be a healthy competitive run that will benefit consumers at large.”

Even though we are racing towards a future where all content will eventually be streamed, traditional TV will not go away overnight says Ashwin Navin of Samba TV.

"Linear is still home to live events such as sports and news, and for events that garner an audience of tens of millions of people. The efficiency of reaching that many people in a single ad buy will be increasingly rare and therefore more valuable to brands who want to quickly bring new messaging to market."

Meanwhile, some ad tech firms like The Trade Desk are helping traditional TV broadcasters to advance their digital advertising capabilities as these players invest in their own over-the-top (OTT) offerings.

"Traditional TV will continue to capture TV viewers who have not shifted to OTT," says Waters. However, for broadcasters and advertisers, it’s now about how quickly they can pivot to where the eyeballs are moving, he adds.

"With OTT, the nature of TV advertising is changing. Data science is being applied to optimise TV campaigns for the first time through OTT. Linear channels cannot offer that level of precision. With more marketers exposed to the power of data, we can expect them to move to data-driven channels that can support this. Such a move will also enable them to compare and measure ad opportunities more fully across all advertising channels."

Louise Romeo of Starcom says there will always be a place for linear TV depending on the audience, but it's more a question of where it fits in the wider video ecosystem.

"Our focus has always been audience first, platform second, to deliver optimised screens campaigns based on robust audience data," says Romeo. "With such fierce competition for a viewer’s attention, it is now even more important to understand what role each platform plays in delivering audience engagement, campaign effectiveness and ultimately business results for advertisers."

But Greg Paull, co-founder & principal at R3, says that if you're looking at ROI, linear TV doesn't tick the boxes. "Advertisers are looking for opportunities to maximise their investment, and linear TV doesn't offer them features like audience targeting, ad performance tracking, ad optimisation, or a range of formats."

However, Jay Kim at Amobee argues that advertisers will continue to see value in linear TV advertising as this format still offers unprecedented traits such as unique demographic buckets and regional/rural inventory advantages.

"These factors will prevent the deprecation of linear TV advertising for the time being," says Kim. "However, as streaming services and metaverse and web3 technologies continue to emerge and innovate, it will be interesting to see how it will affect linear ad spends moving forward." 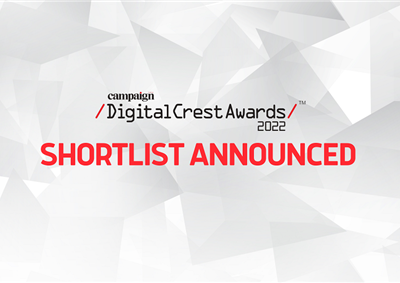