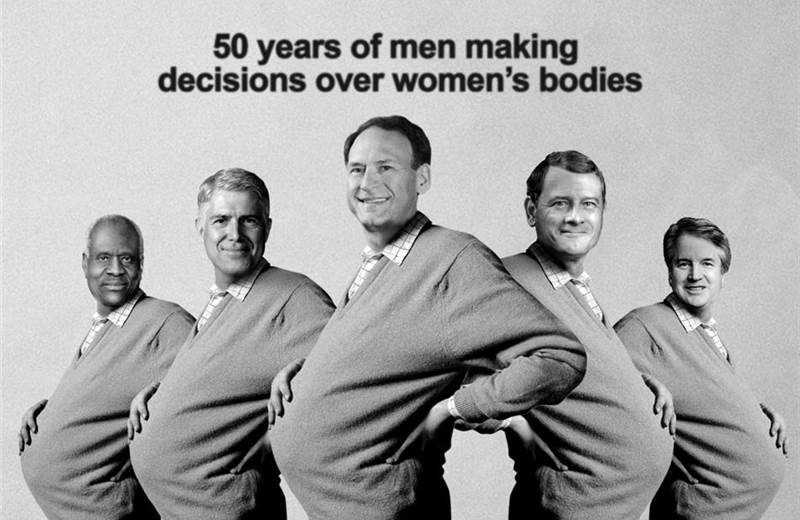 Saatchi & Saatchi has recreated its "Pregnant man" ad on the 50th anniversary of Roe vs Wade.
It follows the classic ad being brought back last year, following the decision to overturn Roe vs Wade (a landmark decision that made abortion legal) in the US Supreme Court.
The agency originally created the work, which placed a male head on a pregnant body, for the Health Education Council in 1970, with the line “Would you be more careful if it was you that got pregnant?”.
In August last year, the work was changed and brought back in response to comments by US Supreme Court Justice Samuel Alito, a long-term opposer of abortion rights.
On the 50th anniversary of the 1973 ruling, the agency has recreated its work once more.
This time, the work is entitled “50 years of men making decisions over women’s bodies”.
The heads of Clarence Thomas, Neil M Gorsuch, Samuel Alito, John G Roberts and Brett M Kavanaugh – the judges who sat on the Supreme Court that overturned Roe vs Wade – have been added to the pregnant bodies.
Franki Goodwin, chief creative officer at Saatchi & Saatchi, said the agency will continue to “lend historic Saatchi creative” until there is change, and added: “Fifty years would usually be a milestone to celebrate, but instead, we commiserate with all the women in the United States whose bodies have, once again, been ruled to be outside their sphere of autonomy.
“The Supreme Court has only appointed four female judges in the past 50 years, and the 1973 ruling was made by an entirely male court – and as such, the question of how men would behave, think or even vote if they were the ones who got pregnant is a conversation that is unfortunately as relevant now as it was five decades ago."